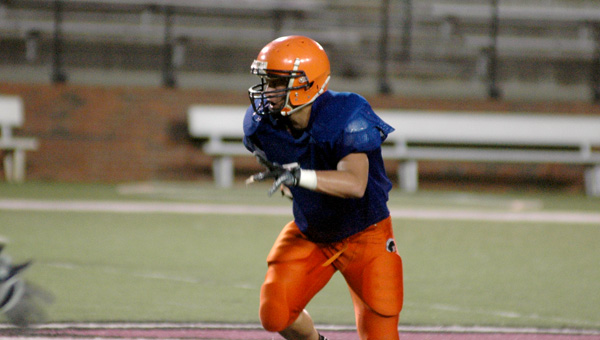 Joey Denison looks to lead the defense and Trojans into the playoffs in 2011. (Photo/Wes Johnson)

Joey Denison knows what it takes to be a successful football player. He learned from his dad.

“He was a part of some good teams,” Denison said. “But I think we have a good team too.”

The Trojans’ junior linebacker will play a key role on this year’s defense making all the play calls and making sure everyone is on the same page.

“It’s a big responsibility,” he said. “I just want to make sure if we do make a mistake we make it together.”

Charles Henderson will rely heavily on their defense this year after losing the vast majority of their offensive firepower to graduation.

“He’s going to be our leader on defense,” head coach Hugh Fountain commented. “He got a lot of playing time last season so he knows what going on out there.”

“He’s always working hard but I’ve seen him talk a lot more out there and really become a leader.”

As a sophomore, Denison saw substantial playing time in the Trojans’ 5-5 season which ended in a playoff loss to St. Paul’s of Mobile.

Denison feels that the 2011 Trojans are ready to make the next step.

“I think we have a good team this year,” he said. “We get along really well and play well together.”

While teamwork and camaraderie are essential to success, Fountain believes that a good leader is also vital.

“Experience is important and he played a lot last year. Joey will have a lot of responsibility but I’m confident in him to get the job done.”

The Trojans won’t rely on Denison solely on the defensive side of the ball, however. Fountain expects him to play fullback at times as well.

“We’ll use him some offensively when we need him,” the coach said.

Denison’s work ethic, however, may be his largest contribution to the team.

“He’s not the biggest or the strongest guy on the field but he’s one of those guys you never have to check on to make sure he’s done his work,” Fountain said. “He’s kind of quiet and laid back but he always puts in the work in the weight room and on the field.”

“You can build around a guy like him. When you have a solid foundation to build from it makes the team stronger.”

Denison and rest of the Trojans will be on display Aug. 19 as they take on cross-county rival Pike County in their annual jamboree game. The game will be played at 7p.m. at Veterans Memorial Stadium.