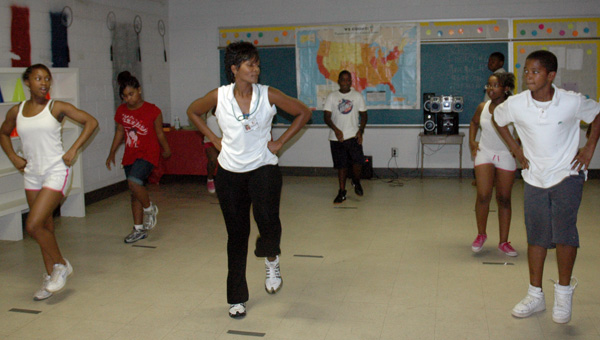 LaWanda Bell dances with children during a fitness routine at the Christian Life Center. (Photo/Jake Blocker)

There is an organization in Troy where making a difference in the life of a child begins with working to instill healthy habits at an early age.

Bell said the inspiration for the children’s fitness program came to her during a “basic summer camp,” when she met young children struggling with obesity. “It inspired me to want to make a difference in the lives of those youth,” Bell said.

The “Get Fit Kids” summer camp is in their second year and, according to Bell, the camp has grown tremendously.

“Some children come for half the summer, while others will come throughout the whole summer for the program,” Bell said. “Basically, everything is upbeat. You’re going to have to move. You can’t just sit and be still.”

The program includes numerous activities for the children to take part in and while the children are exercising, playing and having fun, they are being taught to become outstanding young men and women and are praised for making positive adjustments to their attitudes.

Bell said she hopes the fitness program will gain support from the local community so that she can take combating obesity to the next level.

“We do a lot of bicycling, kickball, dancing, any type of sport, we do it,” Bell said. “Now, my biggest thing is really trying to get the city of Troy—the local community—involved in this, because we know that the state of Alabama has a very high obesity rate. We’re trying to stop that.”

Bell said she believes that if she can help teach children to have fun exercising and eating right, then they will carry those healthy habits into adulthood.

“My goal is to stop obesity in their youth, so they won’t become overweight adults,” Bell said. “It’s not just about exercising. It’s about eating right and getting the proper nutrients, from fruits and vegetables that they need.”

Bell said encouraging healthy eating habits are just as important as exercise, so much so that she, along with help from co-workers at the Christian Life Center, planted a garden behind the center where tomatoes are currently sprouting.

With the belief that healthier lifestyles naturally lead to fewer doctor’s visits, Bell said she has a sense of fulfillment helping children and that the response has been great.

“They are loving it and they are enjoying it,” Bell said. “They come excited every morning and are enthused by it and a lot of them have said that if it wasn’t for this workout, then they would probablybe sitting at home playing video games and eating some cookies. A lot of times, with children that play video games, they just sit there and snack the whole time. So, they’re playing games, snacking and aren’t moving. My goal is to definitely get these children moving.”

Bell said that by instilling healthy lifestyle habits in the youth, she has seen them improve their grades.

Starting a program of this caliber has not gone unnoticed.

Bell said some employees from the Black Entertainment Television (BET) network have contacted her about her work with the children’s fitness program.

“We shot a couple of videos on last summer and I’ve been making contact with them and they are trying to work out a plan on getting us to come to BET. They were so excited about what I had going on down here in Alabama that they wanted to be a part of it.”

Bell said just as soon as things become finalized with BET, she will “let the community know.”

Bell said part of the drive behind the children’s fitness program is to walk in the footsteps of first lady Michelle Obama.

“Michelle Obama is doing the exact same thing, going from state to state, trying to launch a ‘get in shape,’ ‘get healthier,’ and ‘get fit’ campaign. So, we’re really trying to walk in her footsteps and are trying to do the same thing here in Alabama.”

Bell said she wouldn’t mind taking a trip to the White House to show the president and the first lady what Alabamians are doing in Troy, to encourage healthier lifestyles in the leaders of tomorrow.

Bell said she is hoping that she can gain enough sponsorship so that children whose parents may not be able to afford the fee will have a way to participate in the program.

Todrick Burk, 6-year-old of Troy and aspiring drummer, said he enjoys playing out at Murphree Park and walking the trail.

The Christian Life Center is located at 223 Segars St. in Troy.