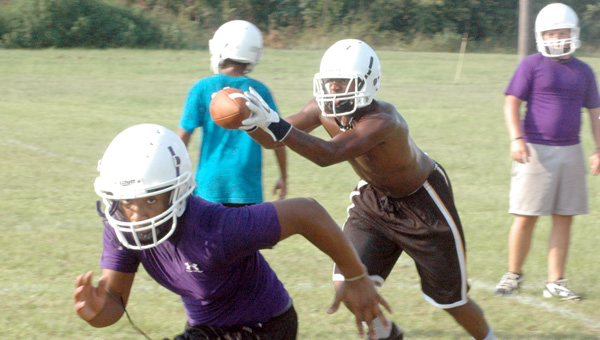 Goshen head coach Bart Snyder knows one thing about his 2011 Eagle team. They will run the football.

“We’re gonna start with the run,” Snyder said. “We’ve had success running the ball and that’s were we’ll start.”

Losing Marcus Jackson, who signed with Louisiana-Lafayette after graduating, would leave a large void for many teams. But other teams don’t have Reginald Foster.

Foster, who rushed for over 1,000 yards the past two seasons, returns for his senior season to carry the load for the Eagles. No more Marcus Jackson. No more splitting time. This is Foster’s year to shine … alone.

“We’ve got some guys who can come in and spell for him,” said Snyder. “But he will see the majority of the carries.”

One of the obstacles Goshen must overcome is losing three of five starting linemen from last year’s team.

“You can’t replace game experience,” Snyder said. “We’re just going to have to get to work and find the best guys.”

One advantage Foster will have in a veteran quarterback handing him the football.

Jerome Lawrence will start for the third season for the Eagles. Lawrence will also help spread the ball through the passing game.

Goshen finished a spectacular 8-2 season with a disappointing 48-26 loss to Mobile Christian at home in the first round of the AHSAA playoffs.

The Eagles outscored their 2010 opponents 419-194 while averaging 42 points per contest.

Goshen’s only regular season loss came in the second week in the form of a 21-19 decision against Elba. The Eagles picked up a big win at Pike County, 47-24, in a four road game stretch in which Goshen remained flawless.

Snyder’s Eagles are looking for their fourth consecutive playoffs appearance. In 2009, Goshen made it to the second round before falling to Pickens County.

With Foster in the backfield the Eagles are sure to be flying high once again and make a run at the 2A Region 2 crown.