Davis honored for 58 years of service 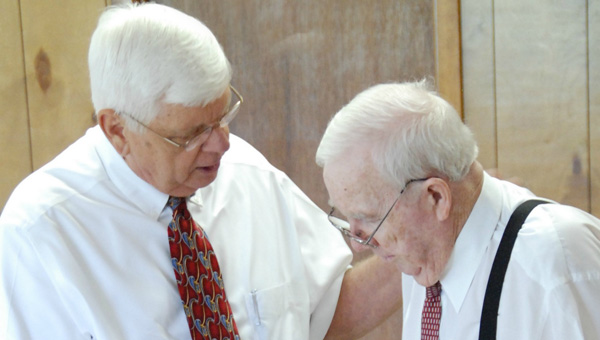 Rev. Ron Ball, District Superintendent of the Montgomery/Opelika District, presents Rev. Lavon Davis with a plaque in honor of his years of service. (Photo/Wendy Ward)

The Rev. Howard Lavon Davis was honored for 58 years of faithful service to the Lord and his people at a reception at Murphy’s Chapel Sunday afternoon. Murphy’s Chapel was the last church served by Davis, whose service record is long and storied.

Davis began his ministry in 1953 in the Elba Circuit that included Brunson’s Chapel, Friendship, Ham’s Chapel and Liberty and followed with Glenwood in 1954 and Campground in 1955.

“I was ordained deacon in 1957 and ordained as an elder and admitted as a full member of the Alabama Conference in 1962.

Goshen was added to Campground in 1956 to make it a two-point charge.

“In 1958, I went to Wewahitchka and to the Macon Circuit in 1960 where a great, life changing revival was held at Union,” Davis said.

“This was the largest church I had served up to this point,” he said. “In 1966, I was at McRae Street in Atmore. This was a new church. Then, in 1968, I went to Ashford that was a medium-size church with a fine parsonage. This was the best house we had ever lived in. It was here that we decided to take a smaller church and supplement the smaller pay by teaching school.

“We went back to Goshen, and I got a job teaching at Luverne Elementary School. After two or three years, I became principal of the school. About this time, the Methodists decided to allow full conference members to become less than full time and take a job without losing their full membership in the conference. I was able to be appointed with less than full status while teaching and while I was principal.”

Davis served the Goshen Charge for 14 years while he was a teacher and principal. He was in education for 23 years, with most of it under less than fulltime status.

“In 1984, Davis was appointed to the Dozier Circuit and, in 1985, was made principal of Dozier Schools, grades kindergarten through 12th grade.

Davis served as a retired supply at Banks, the Lapine Circuit of Lapine, Bradleyton and Petrey and Murphy’s Chapel.

Davis said that his wife, Martha, has been a faithful supporter and has won many young people to Christ and to the churches.

“The tributes from my home church have brought joy to my heart and have made me proud of the good church it is,” Davis said.