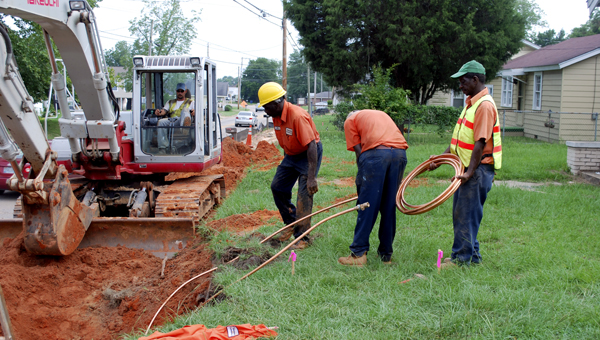 If you frequent Brundidge Street during the week, chances are you have been learning valuable lessons in patience.

Crews are hard at work along Brundidge Street and part of a $6 million water adn sewer infrastructure improvement project, and as a result, the flow of traffic has been interrupted.

Mike Davis, water and sewer superintendent for the city of Troy, said everything seems to be running smoothly.

“Right now we are still laying the water line on Brundidge Street,” Davis said. “Probably next week we’ll be complete with all the water services in the South Brundidge section from Dr. Blackmon’s office to university. We’ve probably got one more week.”

Davis said the work is “still a good ways from even turning it over to the street-widening project.”

The work crew hasn’t experienced too many setbacks, with exception of a minor sewer line repair early on in the project.

“We had a sewer line point repair in the middle of Brundidge Street,” Davis said. “What we’re trying to do is get any and all problems with utilities underground repaired before we start the paving project, so we don’t have to go back and cut through new asphalt.”

Davis said work is relatively smooth and that they are dealing with obstacles as they come.

The heat has been a source of concern with the current project, but Davis said safety precautions are being taken and the men seem to be handling it well.

“It’s hot work and the contractors are doing the best they can,” Davis said. “That’s probably one reason why the pace is as slow as it is, because the days do get so hot and we have to be careful of worker safety.”

To avoid the frustration of being held up on Brundidge Street, Davis suggests taking an alternate route to and from the downtown area, especially during the work hours of 7 a.m. to 6 p.m.