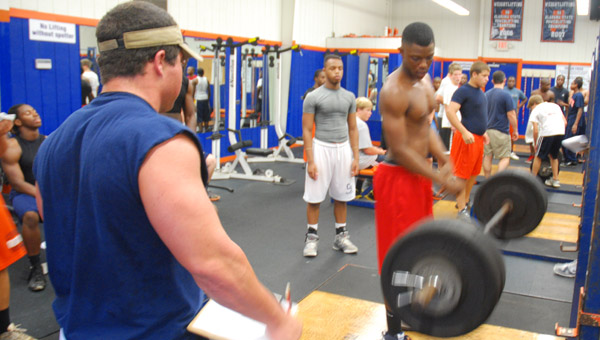 Anyone who has ever played high school football no doubt remembers the days of summer workouts, a time for building the team that will define a football season.

For the coaches and players at Charles Henderson, weight training over the summer is one of the main priorities of a strong season.

“The main thing kids these days need to understand,” he said. “Is that no matter what sport you play, if it doesn’t involve a successful strength and conditioning program you are not going to compete.”

Since the beginning of the summer off-season, the players of CHHS, looking young with only twelve seniors, have followed a strict weekly workout regimen.

Each day of the week focuses on a specific area of physical exercise, ranging from weight lifting to distance running.

Mondays open with upper body weights like the bench press as well as work on triceps and shoulders, followed by lower body work on Tuesdays that includes squats and pulling exercises.

Things get kicked up a notch on Wednesdays, dubbed Explosion Day by the staff, with exercises designed to simulate the fast motions expected in routine play, such as jumps, shrugs, and jerks.

All three of these days include general running exercises such as stadiums, 40-yard dashes, and even a mile and a half course run across both the high school and Troy University campuses.

Thursday serves as a combination day, focusing on a mix of the previous workouts alongside the introduction of gasser drills, which combine distance running with sprinting, with Friday set aside for rest or extra training requested by players.

“We’re not focusing on the end result but on the process it takes to get there,” Helms said. “We want everyone’s maximum effort. As long as we’re seeing improvement every time, it’s a sign of good work.”

“We’ve had some really good teams because of the level of athletes we develop through the weight program,” Fountain said. “If you want to be a good athlete, weight lifting is a number one priority.”

After a 6-5 season last year, only time will tell if the tough strength and conditioning program this summer will give the Trojans the edge they need to improve their lackluster record.

The CHHS Trojans will be back in action for 2011 in a jamboree game at home against in-county rival Pike County on August 19, followed by the kickoff of the regular season with a home opener against Beauregard on August 26.