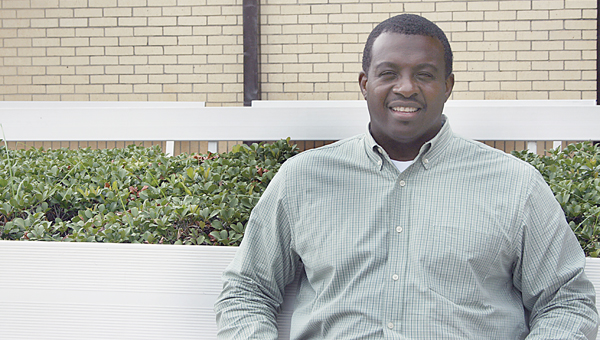 Aaron Brown came into education through the back door.

And, had it not been for a D.A.R.E. he took, he might still be chasing down lawbreakers.

Brown was working for the Montgomery Police Department when he signed on for the Drug Abuse Resistance Education (D.A.R.E.) program. He received the training that he needed to go into the schools and teach the students about the dangers of drugs and give them the life skills they need to avoid involvement with drugs, gangs and violence.

“I had so much fun teaching those young people. It was an opportunity to get to know kids and to inspire them, to talk to them about morals and to point them in the right direction.”

And, had it not been for a chance meeting with the assistant superintendent of Montgomery County Schools, that might have been the extent of Brown’s teaching experience.

“When I was introduced to the assistant superintendent, he said, ‘Aaron Brown? I’ve been hearing good things about you.’ He told me, from what he heard, I had done an outstanding job with the D.A.R.E. program – that I had really gotten through to the kids,” Brown said. “He asked me if I had ever thought about teaching as a career. I told him that I hadn’t. He told me to think about it.”

Brown thought about it and decided that perhaps teaching was his calling. He attended night classes at Troy Montgomery while he continued to work with the Montgomery Police Department.

With a bachelor’s degree in education, Brown was ready to embark on a second career, a career in education.

His first teaching position was at a career technology school. That job gave him the opportunity to continue his education. He earned a master’s degree at Alabama State. He later received a certificate in administration from AUM that paved the path he wanted to take in his career.

“I knew a lot about Troy because my wife and daughters and I came here to Troy University football games,” Brown said. “We enjoyed tailgating and found that Troy is a community with a true family atmosphere. It is the kind of community that my family and I wanted to be a part of.”

Brown said he is excited to be a part of Troy’s outstanding educational community and looks forward to the opportunities to be an active part of all that is Troy.

“My main purpose is to provide a safe, comfortable environment where all students can learn and be successful,” he said. “I want Charles Henderson Middle School to have a learning environment that is consistent – one that everybody understands.”

CHMS has a competent and hardworking faculty and staff and Brown said that he is looking forward to a strong working relationship with such outstanding educators.

“It is my intention to be involved in all areas of our educational curriculum and also in extra-curricular activities, both on and off campus,” he said. “It is important for the students to know that I support them in every aspect of their educational experiences.

“The students are why I’m here. They are the reason and I want them to know that I’m behind them all the way.”

Editor’s note: This is the third in a series of articles profiling new campus principals in Pike County.