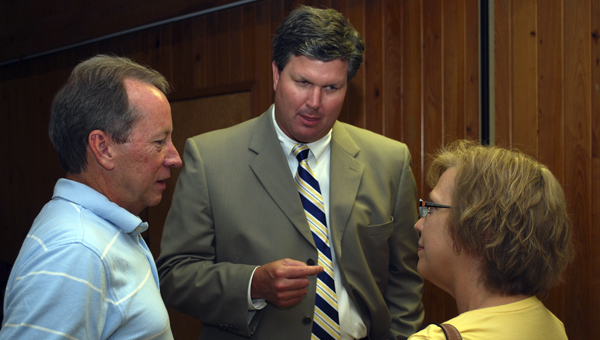 Lee HIcks, center, visits with Jeff and Amy Spurlock during a reception on Tuesday.

“I’m tickled that there are so many people here,” the mother of three said.

“This is a good turnout and it’s a positive thing for the school system,” said Steven Curtis, president of the foundation. “I see parents, teachers, administrators, community leaders … all here to meet our new superintendent.”

Hank Jones, retired superintendent and member of the Foundation, said while he wished the crowd would have been “1,000 people,” he was pleased with the show of support from the community and the message it sent to the schools. “We’ve had a good mix of people here,” he said. “It’s a new day, a new beginning.”

Hicks was hired by the school board in June and began working earlier this month. The reception was designed as an opportunity for the community to meet Hicks, who previously worked as principal at Prattville High School.

As he shook hands and visited with the line of people that snaked beyond the doors of the Arboretum, his wife Shae and children were busy meeting folks as well.

“I was at Rotary the other day when Mr. Hicks and the principals came to talk,” said Alex Whaley II. “I have to tell you, I got excited sitting there and listening to them. We have a real opportunity ahead of us … a fantastic opportunity.”

Roxie Kitchens, president of the school board, said the reception proved an excellent vehicle for the community and the new superintendent to meet.

“I’m very excited that so many people are here to meet him.”