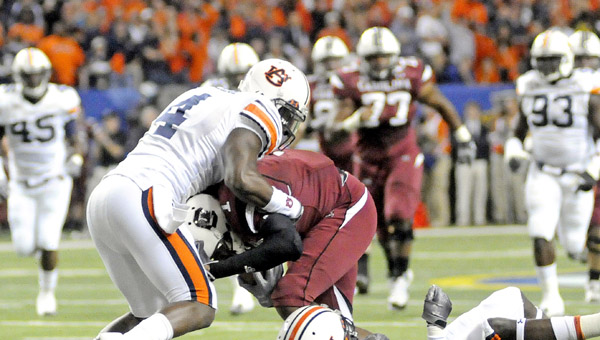 Auburn's Zac Etheridge (4) makes a play during the first half of the 2010 SEC Championship between Auburn and South Carolina in Atlanta, Saturday, Dec. 4, 2010. (Messenger Staff Photo/Thomas Graning)

Etheridge, who was a member of Auburn’s 2010 National Championship team, said he is both relieved and excited.

“I’m extremely blessed just to get a shot,” Etheridge said. “It’s all in God’s plan to get this opportunity to play again and get the chance to be a Raider.”

Etheridge’s neck injury while playing at Auburn was well documented. The safety was temporarily paralyzed during a game against Ole Miss in 2009 where he suffered torn ligaments and a cracked fifth vertebra.

Aside from the injury, the former Tiger feels his football career has been a dream come true.

“As a kid coming into the game, everyone’s dream is to play in the NFL,” he said.

“Not knowing if I would ever play football again then coming back and helping a team win a National Championship and now this, it’s been special.”

While Etheridge hasn’t been guaranteed a roster spot, the chance for him to win one is most certainly possible. Oakland will need help in their secondary, although they ranked second in the league in passing defense. The probable loss of Pro Bowl cornerback Nnamdi Asomugha and the question mark over the future of safety Michael Huff leaves the Raiders with some holes to fill.

If Etheridge is awarded a roster spot, he would reunite with two other former Auburn Tigers on the defensive side of the ball. Both Quentin Grooves and Walter McFadden return to Oakland this season. Groves started 12 games for the Raiders a year ago.

“It’s good to have Walt and ‘Q’ there to help me make that transition and learn the defense,” Etheridge said. “I’ll be more comfortable going out there with guys that I already have that experience with.”

Another former Auburn standout, quarterback Jason Campbell, will be staring down Etheridge for the other side of the ball.

“I’ll be doing my best to pick him off as much as possible,” he laughingly said.

And as for possibly having three Auburn Tigers start on defense for the same NFL team, Etheridge feels that is a testament to his former collegiate teammates’ work ethic.
“It speaks a lot of those guys who are already there that the Raiders continue to like Auburn guys,” he said.

Etheridge played in 33 consecutive games for the Tigers before his injury. He would recover and was deemed eligible the following fall after missing all of spring practice.

In 46 career games at Auburn, Etheridge recorded 151 tackles and three interceptions. He also returned a fumble for a touchdown against Arkansas last season.

According to Charles Henderson head coach Hugh Fountain, Zac is the first former Trojan to sign an NFL contract.

Etheridge will fly to Oakland today to tour the facilities and meet with teammates, coaches and team personnel.

The Raiders finished 8-8 last season and will play their first 2011 preseason game August 11, against the Arizona Cardinals.