Sharing a love of the game 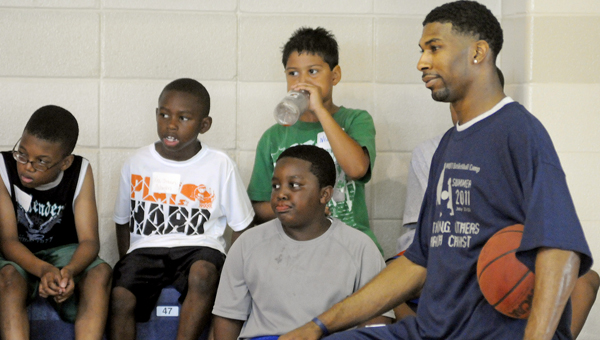 Coach Lamayn Wilson talks with participants during the 2011 Motivating Others Through Christ basketball camp in Troy, Ala., Friday, July 22, 2011. (Messenger Staff Photo/Thomas Graning)

When Lamayn Wilson was 10 years old, he was dribbling a basketball around the yard at his home in Highland Home, dreaming of one day making the high school basketball team.

He was a little fellow with high hopes and big dreams. But, most of the time, it’s the tall fellows who have hoop dreams. So, Wilson’s interest soon turned to football.

“I loved football and that’s all I wanted to play for a while,” Wilson said.

Then, one summer he shot up four inches and basketball became his passion.

And, it still is.

At age 31, Wilson is a professional basketball player who plays in the international Euroleague and he said that he is blessed to be there.

“God has been good to me,” Wilson said. “To play across the water is a true blessing. I’m so thankful.”

But the Euroleague Basketball isn’t where Wilson wanted to be when he graduated from Troy University. He had his sights set on the NBA.

He had played forward for the Trojans from 2000-02 and could boast of an Atlantic Sun Conference title. He had his sights set on the NBA.

But when his hopes of playing in the NBA vanished, he got an agent and took his talents across the big water.

“I’ve been playing in Euroleague Basketball for 10 years now and I’ve gotten to go places and see things that I probably would never have been able to do without this opportunity,” Wilson said. “It has been a great experience.”

Wilson has played for and against teams in Latvia, Russian, Germany, France, Italy, Ukraine, China, Turkey and the Philippines.

“I like to play for top ten teams and, when I get that chance, I take it,” he said. “So, I’ve played for different teams in different countries.”

There are about 64 teams in the Euroleague and they play a rather hectic schedule, from August to June.

However, language is not a barrier for the teams in the Euroleague.

“Every player and every coach in the Euroleague has to be able to speak English,” Wilson said. “There are so many teams and players from so many different countries that there has to be a common language and it’s English. I was lucky, I didn’t have to learn a second language.”

When Wilson is “off at work,” he is joined by his wife, Dana, and 18-month-old daughter, Karmen.

“They go with me and that makes it nice,” Wilson said. “The teams furnish us with a house and a car during the season. All we have to pay for is food, gas and phone.”

In a lot of ways, playing for the Euroleague tops the NBA but Wilson admits that he likes being home.

“Troy is home for us,” he said. “We’ve been here 10 years and we love it. When my career with the Euroleague is done, we’ll be back in Troy to stay.”

Wilson’s “home” this past basketball season was the Ukraine. Where it will be next season, he’s not sure. “We’re still in negotiations,” he said. “That should be settled in the next week or so.”

Wilson said that he hopes to play Euroleague Basketball six more years. Then, he’ll be an old man in basketball years and his dunking days will be done. But not his round ball days.

“I’d like to coach high school basketball or college,” he said. “High school would be my first choice because the kids are young and willing to learn. I can help develop the players. In college, they already think they know most things. I like the idea of being able to develop players in basketball and also have a positive influence on their lives.”

Wilson got a jump-start on his future goals this week when he conducted a free basketball camp for kids ages, eight to 18 at the Troy SportsPlex, Friday and Saturday.

One hundred young basketball enthusiasts signed up for the camp and more than 60 attended on Friday and more were expected to attend the Saturday camp.

“I’ve been so blessed in my career and in my life and I just wanted to be able to give something back,” Wilson said. “There are a lot of kids who never have the chance to go to a basketball camp. I wanted to give that chance to every kid that wants it.”

The “Motivating Others Through Christ” basketball camp is being conducted by volunteer coaches, who have the skills and the motivation to work with kids on the court.

“There is a spiritual aspect to the camp in that we want these kids to know that people care about them,” Wilson said.

“I want them to see that you ‘get’ something special when you give back. But you also have to work hard and be dedicated to whatever it is you want to do. I want the kids to know that being successful also means being positive in all that you do and that your life will be blessed when you do for others.