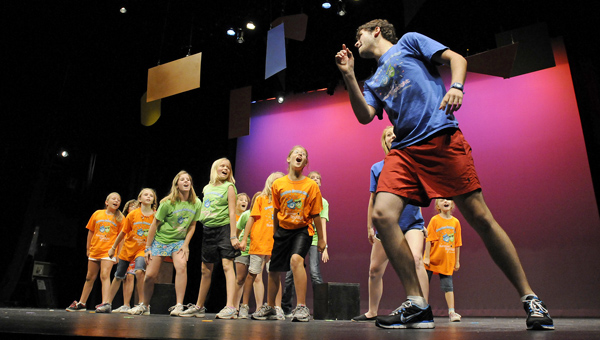 Community theater is alive and well in Troy.

The Summer Spotlight Showcase was the culminating event of the four-day camp where children learn through the arts, music, movement and writing.

“This entire week has been incredible,” she said. “We have had a wonderful time as our campers participated in musical theater, writing, acting, stage combat and the technical aspect of theater. Literally, everything that is necessary to run a show.”

The camp also included stagecrafts. The campers made different kinds of puppets and paraded them on stage during the Showcase performance.

The Showcase brought together all the things that the campers had learned, however, it was just one hour in a week of fun and learning that has become the trademark of the Summer Spotlight Camp.

“This is our third year for the Summer Spotlight Camp and we were splitting at the seams,” Averett said. “We were running out of room and had to increase our staff. Half of the kids were returning campers. So, all of this is a good indication that interest in theater is growing and that’s just fantastic. We are excited.”

“Participating in a camp like this is a very different atmosphere from school,” she said. “School is much more ridged. There’s a lot more ‘Sit down and be quiet.’ The theater is a creative outlet and it stimulates the imagination. And, what kid doesn’t have an imagination.”

“Children learn to work in groups and to problem solve, both of which are very important in the school environment,” she said. “They get to try new things and Summer Spotlight is a safe place to try new things and that’s especially beneficial to kids who are shy. They learn that, if you try something new and it doesn’t work out the way you had hoped, you won’t die from it. Theater gives children confidence and courage.”

What the campers learn at Summer Spotlight camp can be carried over into the school year.

“This experience will help them in so many ways,” Averett said. “It will give them more confidence to speak in front of a class and more courage to step out and do things that they might not have done otherwise. Here at camp, they are a part of group and they learn that the success of what the group is doing depends on each person doing his or her part.”

Averett said the campers also learn how important those who work behind the scenes are in making things happen.

“They learn that the technical people are just as important to a production as those who are in the spotlight. Without those people, it won’t happen,” she said. “For kids to learn at an early age the importance of teamwork is a lesson that will benefit them throughout their lives in the workplace and as contributing members of their communities.”

Dr. David Dye, retired Troy University dean of communication and fine arts, said, too, that there is no educational opportunity that exceeds that of drama camp.

“There is no better place to take ownership of an idea and one’s actions than at drama camp,” Dye said. “It is an opportunity to create something for the very start and develop it. To create magic.”

Dye and his wife, Judy, attended the Summer Spotlight Camp because they are interested in all levels of theater and “because we had five grandchildren attending.”

On a personal level, Dye has seen what a difference the camp has made in the life of one of his grandchildren.

His grandson’s shyness kept him for being a part of the group and made him hesitant to express himself and try new things. After attending the camp for a couple of years, he is not only a part of the group; he is stepping onto the stage with confidence and the enthusiasm of a kid having loads of fun.

“This drama camp and the camp next week for older youth are a phenomenal opportunities for children and their families,” Dye said. “It gives them a venue to c

elebrate. Adena Moree (director of the Troy University of Theater and Dance), Tori Averett and all of the camp staff are to be commended for the outstanding work they do in offering this wonderful opportunity to this area.”

Dye said that upon leaving the Trojan Center Theater Thursday night, a patron of the arts said she has seen many wonderful performances at the university but she has not seen anything better than what she had seen that night.

“And it was truly magic,” Dye said.