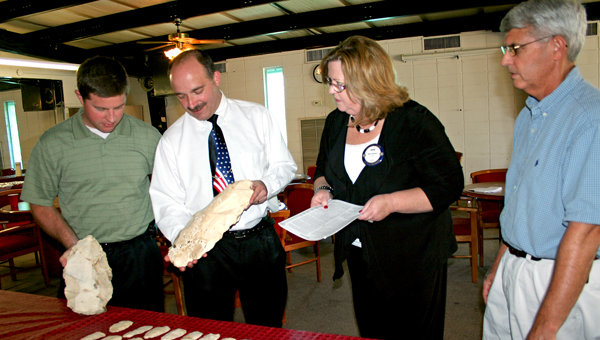 “An indiscriminate slaughter,” was the way John Phil McLaney, Jr., a local historian, described the Battle of Hobdy’s Bridge, which was arguably the last Indian battle in Alabama.

It was a battle that many “remembered but wished they could forget,” McLaney told members of the Brundidge Rotary Club on Wednesday. “The battle was nothing that we could be proud of.”

“There were actually two battles,” McLaney said. “The Battle of Hobdy’s Bridge in February 1837 and the Battle of Pea River Pea Creek six weeks later.”

The Battle of Hobdy’s Bridge took place on the bridge that spanned the river between Pike and Barbour counties and involved about 100 settlers and 75 warriors.

The Battle of Hobdy’s Bridge lasted less than 30 minutes and produced few casualties. But the Battle of Pea River Pea Creek was a much more emotionally charged battle and with great bloodshed.

Both the settlers and the Indians found reason to do battle with the other.

“The Indians had ‘butchered’ a family that included five children and left them lying in their yard,” McLaney said. “Those traveling the Three Notch Trail were in danger of being murdered by the Indians and a trail of settlers’ log houses was burned by the Indians.”

McLaney pointed out that the land that had been promised to the Indians was being taken from them.

“Emotions were running high on both sides at the Battle of Pea River,” he said. “About 250 settlers were involved but very few soldiers. They were led by Brigadier General William Wellborn.”

The Creek Indians were camped about a mile north of Hobdy’s Bridge. Wellborn sent part of his force up the east side of the river and he moved up the west side with his command.

“The idea was to sandwich the Indians and defeat them,” McLaney said. “The Pea River was at flood stage and the settlers had to wade in water knee deep to chest high to get to the fight.”

The battle was a fierce one that ended in hand-to-hand, Indian fashion fighting.

“The ‘soldiers’ were given only 24 cartridges and were told when those gave out to get ready to fight with Bowie knives or get scalped,” McLaney said.  He read from an eyewitness account of the battle by a 16-year-old boy, Buck Glenn, who was the first to kill an Indian.

“Buck Glenn told that when he shot the Indian, another young boy, the son of Gen. Wellborn stepped from where he was hiding and yelled, ‘Buck’s killed an Indian.’ He was immediately shot in the head,” McLaney said. “The Indians shot at the sound and they seldom missed.”

The fighting lasted for three hours and 52 minutes and it was constant.

McLaney said deciding who was right and who was wrong in the battles between settlers and Indians depends on “how you look at it.”

“If you were a settler who saw those five children lying butchered in their yard or had your house burned, then you would see it one way,” he said. “But there was no word in the Indian language for ‘buying’ land. So, if you believed that you had only been given stewardship of the land that the white man was taking away, then you would think of the battles in another way. It depended on how you looked at it.”

The Battle of Hobdy’s Bridge and the Battle of Pea River Pea Creek were examples of two wrongs not making a right.