Possible ‘break out’ at Salvation Army 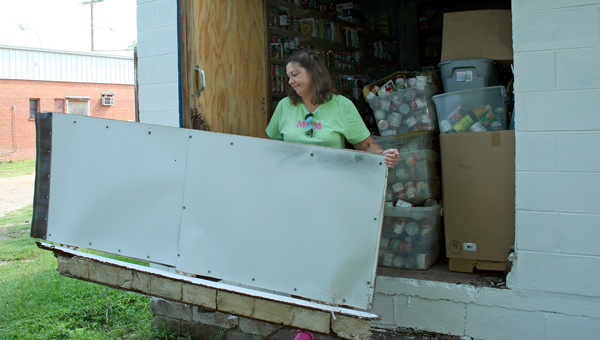 Kim May looks at the damage at the Salvation Army in Troy. (Photo/Jaine Treadwell)

Troy Police aren’t exactly sure whether the intruder(s) at the Salvation Army Thrift Store on South Brundidge Street in Troy broke in or broke out Monday night.

They won’t be sure until all of the evidence has been collected and the investigation at the store is completed.

“The back door to the store had been torn from the frame and, from the way it looks, the door was knocked out from the inside,” said Kim May, director of the Salvation Army in Troy. “Police are thinking that whoever it was could have been hiding inside the store when we closed. That’s a scary thought – that somebody might have been hiding in the store. But it’s very possible that it could have happened that way. We won’t know that until the investigation is completed. Either way, it’s especially sad that someone would rob an organization that is here just to help people in need.”

May said no paper money is left in the Salvation Army cash drawer at night, only change.

“All they got was some quarters, $19.25 in quarters,” she said. “That was all the money that was in the cash drawer. The drawers to the desk in my office were pulled open but, as far as I can tell, nothing was taken. I guess all they wanted was money.”

The burglary has given May reason to approach closing the store differently. “I’ve never thought about looking through the store to make sure no one is hiding in here at closing time,” she said. “But, from now on, that will be part of our closing procedure. It’s sad that times have come to this. Maybe something good will come from this.

“Maybe it will alert other businesses to the possibility of someone hiding in the store, taking what they want when the store is closed and then breaking out.”