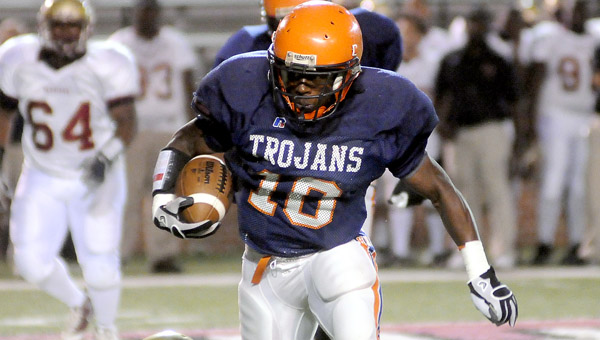 Charles Henderson’s Quintus Moss has plenty of reasons to be excited. The former Trojan will not only play for the University of North Alabama this fall but will represent his former high school at AHSAA All-Star football game on Thursday.

The game is part of the 15th annual Alabama All-Star Sports Week in Montgomery.

Moss said he is delighted to represent his school and his coaches.

“It’s an honor to have the opportunity; I just want to make my coaches and family proud.”

Moss was informed of his selection in February and has used North Alabama’s training practices to help him get ready for the North vs. South showdown.

“The coaches at North Alabama sent me a large workout package so that has helped keep me in shape and get ready for this game at the same time,” Moss said.

“He obviously did a great job for us; there is a lot of pride that goes into that game and we are glad to have Quintus represent us.”

Moss will start at safety for the South squad and expects to receive a large amount of playing time.

This is the third consecutive year Charles Henderson has sent a player to the football game.

“Anytime you can have a player in an all-star game it makes you proud as a coach,” Fountain said.

The 5-foot 9-inch 185 pound Moss says the South coaching staff has kept the team busy since they checked into the AUM dorms on Sunday.

“We’ve had two-a-day practices everyday and they’ve had things for us to do at night; there’s not a lot of down time,” Moss said.

For Terry Bowden’s Lions, Moss is expected to compete at both running back and defensive back. Moss said he is ready to report to Florence later this summer.

“I’m ready to get there and help North Alabama win championships,” he said. “They expect to win up there and that’s why I wanted to go there.”

North Alabama kicks off its season at home against Central Oklahoma on September 1.

The Lions finished 9-4 a year ago including a 47-24 loss to Delta State in the second round of the NCAA Division II playoffs.
Moss was not the lone Trojan in Montgomery this week.

Jalin Lawson represented Charles Henderson in the All-Star baseball game on Monday. Lawson finished 2-for-4 in the doubleheader. His South squad lost both games to the North, 8-4 and 13-0.

The All-Star softball games were also Monday followed by soccer on Tuesday, basketball on Wednesday, and volleyball on Thursday.

The week-long sports event includes a Coaches School, a kickoff luncheon, Championship Coaches Banquet, as well as, the Sportsmanship Luncheon.

The North vs. South All-Star football game is scheduled for Thursday at 7 p.m. at Cramton Bowl.