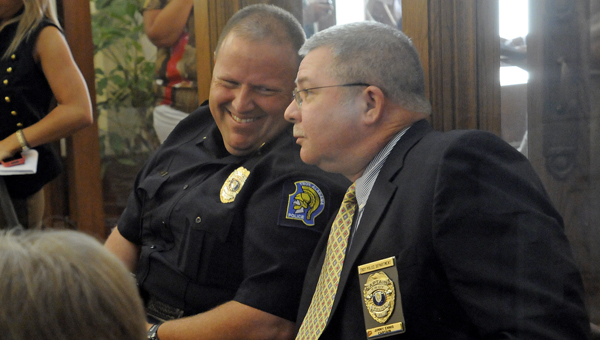 Ennis was unanimously appointed to the position at the regular meeting to the Troy City Council Tuesday afternoon. Ennis and Troy Police Capt. Randall Barr were the two candidates for the position.

Council President Johnny Witherington said when Everage announced his retirement, the council immediately looked to hire from within.

“We have an excellent police department and we had two outstanding candidates,” Witherington said. “During the interview process, what impressed me was that they both pledged their full support to the other, no matter who the council appointed. They are both fine men.”

Ennis said that he appreciates the opportunity to serve as the city’s chief of police and readily accepts the challenges.

“I’m looking forward to the job,” he said. “Chief Everage and I will be working closely together and I want to learn all that I can from him because he knows how to do the job.”

Ennis said he is confident of the continued support of the mayor and council and he pledged to do his best on the job.

“The door to my office will always be open and we will be fair in addressing any problems,” he said. “We will continue to hire and retain good people in the department and provide them with the training and equipment they need to do their jobs.”

Ennis is originally from Brantley. He has a degree in criminal justice from Troy University.

Grant Lyons, who recently took the reins as coordinator of the Pike County Extension office, spoke briefly to the council and expressed his interest in being involved with city’s events and activities. He said he will make it a priority to keep the city informed about what’s going on with the Extension System and looks forward to a good working relationship with the city.

Mayor Jimmy Lunsford announced that the Department of Transportation will assist the city with the construction of a right-turn lane off U.S. 231 onto Franklin Drive.

The council approved tax abatements for the expansion of KW Plastics in Troy. The capital investment will be around $16 million.

The council tabled the resolution regarding bids for the removal of the Collier House, which is an annex to the Colley Senior Complex.

Three appointments were made to the board of equalization. Those appointed are Willie D. Henderson, Deborah F. Stell and Jerry Carden.

The council granted an-off premises only beer license and an off-premises only table wine license to Food Mart, 1113 Highway 231.

The council closed with comments of congratulations to Ennis and those of appreciation to Barr for outstanding performance. The council members and mayor said they look forward to the continued working relationship with both police captains