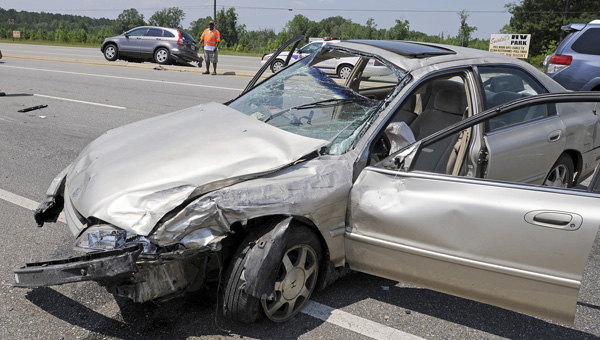 A vehicle is seen at the scene of a two-vehicle accident in Brundidge, Ala., Thursday, July 7, 2011. (Messenger Staff Photo/Thomas Graning)

Witnesses say the man who wrecked his vehicle in Brundidge on Thursday had been driving erratically just minutes before the collision.

Witnesses say the driver of a gold Honda Accord had been driving erratically minutes before he rear-ended the driver of a Honda CRV near the Hardee’s Restaurant along U.S. 231 in Brundidge.

“He was driving real erratic through the traffic, and somebody had already called the Brundidge Police and reported him, but when he got right here he went across the other lane of traffic hit the other car, then his car flipped,” Jennifer Maulden said.

Moses Davenport, chief of police in Brundidge, said the on-site report states the driver of the Accord had passed out shortly before the impact.

Davenport said he was aware of phone calls made to the BPD regarding the erratic driving behavior of the driver from vehicle one.

“From what I understand, we did get some calls about the driver, but the office had not made contact with the driver of vehicle number one prior to the accident,” Davenport said. “They received a description of the vehicle and were out looking for the vehicle that fit that description.”

Maulden said when she and her husband saw the wreck they immediately stopped to help.

Details surrounding the incident are still being investigated by BPD.