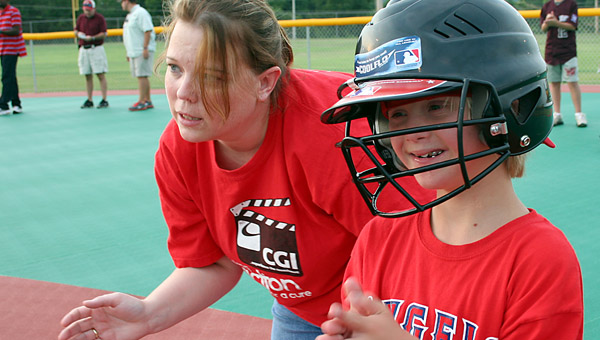 Volunteers smiles are a big as the players' smiles at the Miracle Field. Above, a volunteer and a player share a moment as they cheer on a teammate. (Photo/Jaine Treadwell)

‘I would have given anything for a chance like this’

As a young boy, Chris Cushing wished for a chance to play baseball. But his physical activity was limited to physical therapy.

It would have taken a miracle for Chris to have a chance to play baseball.

It didn’t happen. Not then.

But Thursday night, Chris Cushing was part of a miracle.

As he stood near home plate coaching and cheering the Troy Miracle League kids, Chris was a part of the game he never played as a kid. But that didn’t matter.

“I just enjoy seeing these kids play,” he said, with a smile. “I would have given anything for a chance like this when I was a little boy but this makes up for it.”

Chris said he had a wonderful childhood with loving parents and he realized that there were things that he couldn’t do and opportunities that he wouldn’t have.

“When I got in high school it didn’t matter so much about baseball anymore,” he said. “I was in the band. I went to Jacksonville State on a scholarship and I studied and worked hard. I did what I could do.”

Chris is a computer programmer at CGI in Troy and a volunteer with the Troy Miracle Field League. He hopes that he can serve as a role model for kids with disabilities.

“I want these kids to know that they should never give up,” he said. “Never let anybody tell them that they can’t do things. Maybe they have to do things different but they can do things. That’s part of the reason that I’m out here. And, the other reason is because it’s fun. Because we’re playing baseball.”

The Troy Miracle Field League Braves and Angels have one more game to play but the kids don’t want the season to end.

“We’re looking at playing a few more games because this means so much to these kids,” said Shane Brown, Braves coach. “When you look out on the field and see the smiles you don’t want it to end either. It’s awesome to be a part of this. I’m out here because I want every kid to have the same chance to play baseball that I had and the same chance that my kids have. But it’s about more than baseball. It’s about smiles.”

And smiles of the moms and dads rival those of the kids.

“I watched my older son, Blake, play baseball and it was sad knowing that Austin would never get to play,” Norma Turner said. “So this is truly a miracle field because out here, Austin can be just like his brother. He can be a baseball player.”

Kertina Berry said that she dared not to dream of such a “miracle” in her daughter’s life.

“But I’m so thankful to God for this chance for her to be a part of a team and to enjoy something so much,” Berry said. “I want Aralyn to be the best she can be and enjoy life to the fullest. Out here, life is so good and I thank God.”