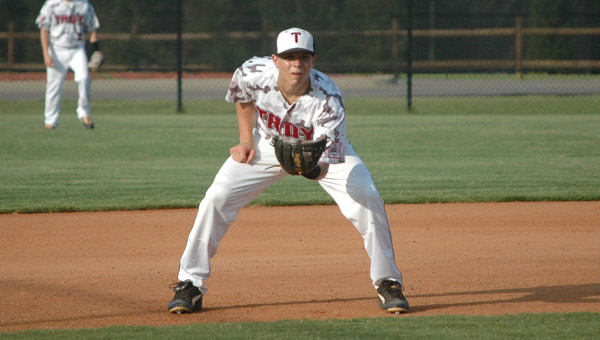 Austin Ingram readies for play in the Distrcit 6 tournament in Dothan. (Photo/Wes Johnson)

Off the bat, Austin Ingram new it was gone. He knew Ashford’s James Lisenby had just hit a game-tying homerun. What Ingram didn’t know is that he would make the play that would propel Troy’s Dixie Boys to victory.

While it was easy for Ingram, at the time, to feel disappointed, the biggest impact he had on Wednesday’s game was the play he would make almost immediately following the homerun.

With the game tied at 12 and one out in the last of the seventh inning, extra innings looked almost certain. Especially, when Ingram was called out on strikes for what seemed to be the second out. The catcher, however, dropped the called third strike and without hesitation Ingram was at full speed to first base.

Ingram would beat the catcher’s throw by a step, advance to second on another heads-up base-running play and finally score the game’s winning run on Hunter Baggett’s walk-off single.

Ingram’s teammates never wavered in their belief in him to get the job done.

“Once he got on base, I knew we would score,” said Baggett.

“We never counted ourselves out. We felt if we could get runners on base we could win.”

After Troy’s tournament run is over, whether they win a Dixie Boys World Series championship or not another game, that single 90-foot hustle play after allowing a gut-shot homerun is what will make them winners.

Coach Gary Fox has a bunch of winners. They hustle, they play for each other and, most importantly, they have fun while doing it. That is a testament not only to Fox and his coaching staff but also the Troy Recreation Department as a whole.

Ingram’s impression on this team’s legacy is not one of allowing a dramatic homerun but that of having the courage to continue to play the game the right way, no matter what.