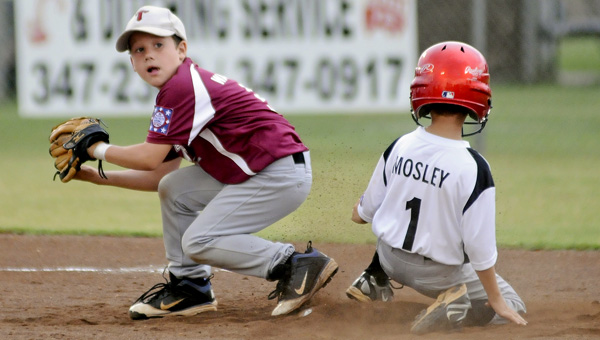 “My hats go off to the Troy Americans,” said Billy Jefcoat, coach of the Troy Nationals, who lost the championship 8-3. “They’ve got a great ball club.”

The Troy Americans were the only undefeated team in the tournament. “It was good defensive battle,” said Coach David Nelson. “The first time we played (the Troy Nationals), we won 20-7. Tonight, we just played real good defense.”

The Americans took the lead early, scoring six runs in the second inning, and held the Nationals to only three runs in the subsequent innings. “Once they got the lead, it was kind of comfortable,” Jefcoat said.

Nelson cited key defense from several players, including Adrian Caldwell. “He got the game winning catch in the outfield,” Nelson said. “It was hit all the way to the fence.”

For Jefcoat, the tournament solidified the future of baseball for Troy. “The sky’s the limit for this age group,” he said. “When you look at the district we play in, and the fact that we were on road … to win first and a second is impressive … There’s a bunch of ballplayers who are 6 and 7 years old who really enjoy playing the game and are really good at it.”

The coach-pitch teams’ post-season play ends at the district level.