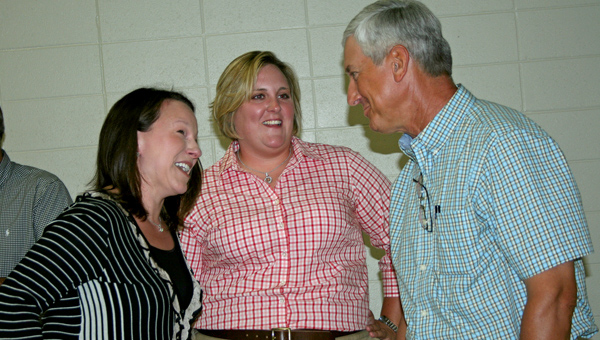 Roby is a member of the House Agriculture Committee.

The purpose of the forum was to give members of the agricultural community an opportunity to speak about relevant issues and what they would like to see in the 2012 Farm Bill.

Each panel member spoke about the needs of his or her commodity in the 2012 Farm Bill.

Ricky Wiggins, a third generation farmer, said that farmers make up less that 1 percent on the nation’s population.

“In providing food and fiber for the United States and other countries, farmers have to contend with too much rain and too little rain, hail, insects, deer, wild hogs and a dozen other conditions and critters that can devastate crops,” Wiggins said in advocating for a Farm Bill that would provide adequate crop insurance and one that will allow full crop production.

Andy Bell spoke in favor of cost sharing for irrigation. The funds would assist farmers in the installation of irrigation systems that would help prevent crop failures during drought conditions.

The CRP program was questioned by Kenny Childree who said that more and more farmland is being taken out of production and put into timber.

“We must also keep the research base going by providing funding for land grants,” he said.

Following the panel presentation, several farmers, landowners and representatives of farm agencies took advantage of the opportunity to speak about their concerns with the 2012 Farm Bill and how it will affect them and the way they make a living.

“What the farmers were saying today is that they need a farm bill that will help them stay in business,” said Jeff Knotts, county executive director Pike-Bullock FSA. “They are asking for a strong commitment of federal support during droughts and other disasters. That’s a way for them to keep doing what they do and a way to keep food and fiber available at affordable costs.”

Roby expressed appreciation to all of those who attended the forum and to those who shared their views on the Farm Bill and their concerns about the future of farming.

Roby said their input gives her insight into how the Farm Bill affects the farmer in the field.

“The number of people here today shows how important the Farm Bill is,” she said. “I appreciate the opportunity to listen to their concerns. We will have other meetings as we work through the bill. I want to know and understand all that I can before I vote.”