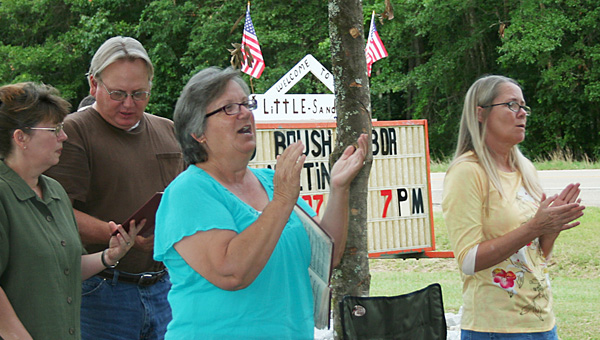 Dwight Berry, an organizer of the Brush Arbor Meeting, joined the gathering in singing the old time hymns. (Photo/Jaine Treadwell)

For some of those who attended the Brush Arbor Meeting at Little Sandridge Monday night, it was a step back in time. For others, it was a first-time experience. For all, it was a time of praise and worship like no other.

With crickets providing the background music for the Benton Brothers and Company and a few lightning bugs dancing in the trees, the setting was perfect for what Dwight Berry and Kimbel Adamson said was God’s revelation.

The inspiration for the Brush Arbor Meeting for both men came from the old gospel song, “Old Brush Arbors by the Side of the Road.”

“Then God revealed it to both of us that we should build a brush arbor and have a meeting by the side of the road and invite everybody who loves the Lord to join us,” Berry said.

“Tonight was the beginning.”

Although the attendance on a rain-threatening night wasn’t as great as Berry and Adamson had hoped, it was a very uplifting service.

“The spirit of God was in this place tonight,” said the Rev. Mack King, who delivered the message. “I preached the Word of God and said what He laid on my heart.”

King’s message was of a shoe salesman who was not thought to be good enough or worthy enough to even attend church. But he continued to answer God’s call and became a preacher. The man’s name was Dwight L. Moody, the American evangelist who believed that “If this world is going to be reached, I am convinced that it must be done by men and women of average talent.”

Billy Sunday and Billy Graham were greatly influenced by this man who was not “worthy enough.”

King said that in the eyes of God, we are all “worthy enough” and called on those present to stand for what they believe to be right and honorable, to be the salt of a world that has lost its “flavor.”

“This is the first of many meetings by the side of the road that we will have,” Adamson said. “God has been at work here tonight and we are so blessed to be here and to be a part of a brush arbor service like this.”

The Brush Arbor Meeting will continue at 7 o’clock tonight and Thursday. Robert Smith, pastor from Newton, will bring the message tonight and Jeff Downing, pastor of Bethel Assembly of God in Ariton, on Thursday. The meetings are non-denominational and everyone is invited.

The Benton Brothers and Company will provide special music and lead the congregation in singing of the old meetinghouse songs.

“The Old Brush Arbor by the Side of the Road” is located off U.S. Highway 231 south of Brundidge. Take a left just across the Pea River Bridge onto Highway123 north. The brush arbor is on the left.