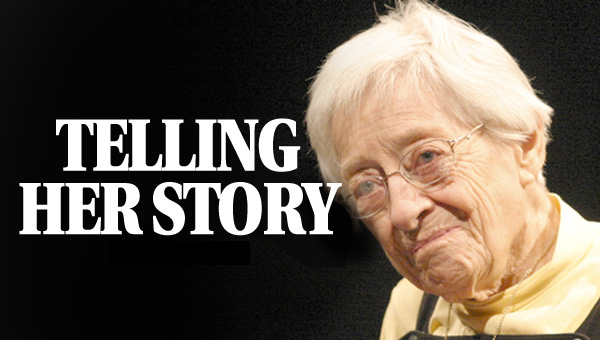 Celebrating the life and legacy of Kathryn Tucker Windham

In late January 2009, Sheila Kay Adams and I sat on the steps of the Trojan Center Theater listening to Alabama’s legendary storyteller Kathryn Tucker Windham weave her magic with words at the Pike Piddlers Storytelling Festival.

Wiping tears from her eyes, Sheila whispered, “Every time I hear Kathryn, I think it might be the last time.” Then with a smile, she said, “Oh, hell, I’ve been thinkin’ that for ten years.”

Kathryn Tucker Windham was 90 years old at the time but she, like a fine wine, had gotten better with age. Time was on her side. Maybe we all thought that she would live forever because she had been “forever” in the lives of three, maybe four, generations of Alabamians.

My first introduction to Kathryn Windham was through “Jeffrey” but I wasn’t too interested in ghosts. However, a decade or more later, she introduced me to the art of professional storytelling. I don’t remember who the other storytellers were at her storytelling festival in Selma, but I do remember Kathryn Tucker Windham. In her quiet, unassuming way, she captured her audience and held each one of us, individually, in the palm of her hand.

Over the years, I heard her “speak” and tell many times but it wasn’t until one day at a storytelling event in LaGrange, Georgia that we talked. I was last in line to get a book signed and, with just the two of us there, I mentioned a story that I wanted to share. We had just started to talk when another crowd began to gather around her. “Just write me,” she said.

It took a while and a whole lot of nerve to put a story on paper for Kathryn Tucker Windham to read. But I did and I got a wonderful response from her expressing deep appreciation for the story and gratitude for sharing it.

When I saw her again a couple of years later, she mentioned the “fascinating” story.

“I still think about it from time to time,” she said.

Kathryn Windham would often be at storytelling festivals and other events that I attended but it wasn’t until the Brundidge Historical Society decided to expand what it does in the area of folk life presentations that I had occasion to talk with her again. She was our first choice as a teller but a phone call was for naught. She was booked but wished us luck.

And we got it.

=Kathryn Windham fell in love with the We Piddle Around Theater, “A marvelous place for storytelling. Don’t change a thing” and she appreciated our efforts to bring storytelling to the forefront in our part of Alabama – “Stories are who we are. They teach us to listen, to learn, to love and to laugh.

Those were Kathryn Windham’s Four Ls of Life and she was a master of all of them.

Kathryn Windham became a huge part of the storytelling foundation that the Brundidge Historical Society was trying to build and over the next three year she became a friend to me as she was to thousands of others all across the county.

How do you call a living legend, “Kathryn?” At first, I resisted out of respect for this amazing lady. But then, it became easier and later so very comfortable.

It was a privilege and honor to drive “Miss Kathryn” back and forth to Selma when she performed at the We Piddle Around Theater. In that slow, soft Southern drawl that was the trademark of Kathryn Tucker Windham, she would tell stories as we drove along or we sat eating lunch or having tea at her home at 2004 Royal Street.

“Kathryn, you’ve gotta tell that on stage,” I would say and she would laugh and say that she just thought of it.

She told about being introduced at a storytelling concert in Tennessee I think it was. She said the lady who was to introduce her told the large audience that for two weeks she had worried about how to introduce someone of Kathryn Windham’s reputation, of her statue.

“But when she got here and I saw how homely she is ….”

Kathryn dropped her head and laughed as she told that.

“What could I say,” she said, still laughing. “She’d already said I was homely.”

That didn’t bother Kathryn one bit. She was so comfortable with who she was and so loving of others that it didn’t make one bit of difference to her.

Another story that I wanted her to tell at our festival was about the time, early in her long and illustrious career, that she was in Dothan for an appearance but, on that same day, she was to appear on television for the first time.

“I’d never seen myself on television and I wanted to see how I looked,” she said. “But, I realized that I wouldn’t make it back to Selma in time to see myself.”

So, as she approached that Pine Lake Motel just south of Montgomery, she decided to stop and watch the program in the lobby of the motel.

“But there was no television in the lobby so I just rented a room for an hour” she said.

She went to her room, watched herself on television and came out to find several men watching her.

“I guess they thought, ‘Poor woman. He never showed up,’” she said laughing at the remembrance.

After we stopped laughing, I asked how she looked on television to which she replied, “Well, I looked pretty good.”

A funny thing that happened at a motel. When Kathryn was coming to the Pike Piddlers Storytelling Festival for the second time, she called and asked if I’d gotten a handicapped room.

When I picked her up at her room for the concert the first night of the festival, she said that she loved the room and the toilet was wonderful

Somehow, along the way, we got this “chicken thing” going. I think it started with our interest in chicken glasses that came out around 1940 – real glasses for chickens. We talked a lot of chicken on the phone and shared “chicken” cards.

The birthday card I sent her in June wasn’t a birthday card but it had a chicken on it. I thought it would make her smile. She liked to “keep things going.”

“I’m nearly 92 years old and I’ve never been to a snake handling and I want to go,”

After much asking and searching, I found a place but things happened and we weren’t able to make the trip. “Next year, we’ll go.” But it was not to be.

Of the memories that I have of Kathryn, the one that really stands clear is at Christmas time 2009. She had chosen to be the teller at the BHS’ Christmas storytelling event.

And what a wonderful time we had on that Friday night in early December listening to Kathryn’s Christmas stories and playing the combs.

On Saturday, we went to the Christmas dinner hosted by the women of Brundidge United Methodist Church. Someone told her about something they had bought at the Dollar Tree in Troy. For the life of me, I can’t remember what it was. Anyway, on the way back to the motel in Troy, Kathryn asked if I would mind to run in the Dollar Tree for her. She sat in the car while I ran in and out, in and out. “Direct shopping,” she called it.

When we got back to the Hampton Inn, I got her to the room and started to go.

“Stay and sit with me a while,” she said.

We sat and talked for more than an hour about life, about love and friendship, about death.

I nodded. I didn’t want to think about that.

After a while, Kathryn’s eyes began to close and she nodded off to sleep. I reached over and touched her arm. She opened her eyes.

That night, she performed for the last time on the stage of the We Piddle Around Theater.

Oh, how we all loved Kathryn Tucker Windham, that wonderful gentile Southern lady who loved life and people and who knew the power of a story. It’s through her stories that she will live on.

And, as Kathryn often said, the best way to show love is to say to someone, “Come sit by me and let me tell you a story.”

That will be her legacy.