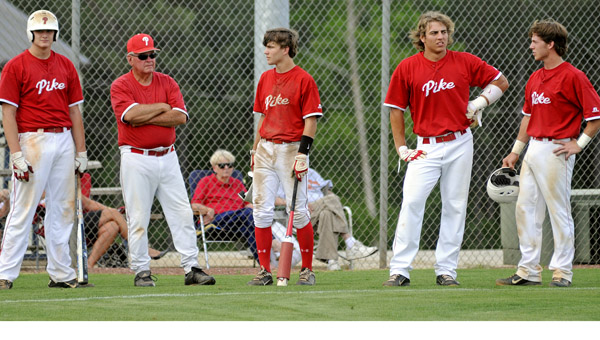 Some teams break records, even when the season has been over for nearly two months.

And earlier this week, the team, specifically four of its players, was honored one more time for their efforts from this past season.

Nick McLaughlin, Lawson Stewart and Sam Carroll were all named to the AISA All-State First Team, while Blake Floyd was named to the Honorable Mention team.

In addition, McLaughlin, who is a raising senior, was also named AISA Hitter of the Year.

This was the first time in the program’s history that four players were honored with the postseason accolades.

“When you have four off of one team, that’s special,” Patriot head coach Butch Austin said.

“Those four, I have never had any trouble with them. They all make good grades – they are all special to me. With players like that you don’t have to do much other than write their names down on the lineup card.”

Each of the four players put up exceptional numbers this season at the plate, with McLaughlin leading the way.

The center fielder lead the team in several categories, including batting average, with .500, home runs, with 16, hits with 66 and RBI with 75.

“It was kind of a surprise,” McLaughlin said. “I wasn’t really striving for anything like this – I just wanted to have a good season.

“I think my first year playing for varsity played a big role and so when this year started, I knew what to expect.”

Along with him, his fellow junior counterparts also shined during the 2011 season.

Floyd finished with a .397 batting average while Stewart finished a few point below at .353.

They also both had over 40 RBIs each on the season, with the catcher finishing with 45 and the second baseman with 40.

“It means a lot to be named as one of the best in the state,” said Stewart about being named the first time second baseman.

“I just worked hard in practice and tried to do everything my coaches told me to. That’s really it.”

For Floyd, the past season almost did not happen due to a health scare that occurred this past winter.

While he admitted his final season stats are not as good as he would have liked, he said he was still thankful for to be out on the field.

“This season only gives me the drive and desire to get better,” Floyd said.

“A lot happened before the season, so just to be out there was a blessing. It is an honor to be named to that list, but I know that I can be better and I am going to work towards that goal.”

As for the only member of that list that will not be returning nest season, Carroll finished with a season to remember.