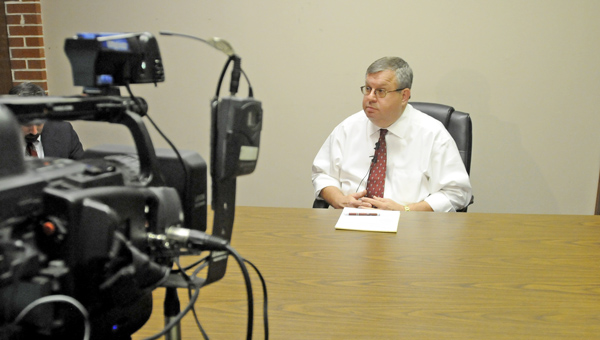 Herbert Reeves, Troy University dean of student services, answers questions during a press conference in Troy, Ala., Wednesday, June 22, 2011. About 50 people, over half current or soon-to-be Troy students, were arrested during a raid on a fraternity party by Alabama Alcohol Beverage Control board at The Pines restaurant early Wednesday. (Messenger Staff Photo/Thomas Graning)

Troy University has temporarily suspended a fraternity pending its investigation into an ABC raid at an off-campus party that led to more than 50 arrests.

Herbert Reeves, dean of students at Troy, said “a little over half” the 50 people arrested early Wednesday were either Troy students or those scheduled to begin classes in the fall. The individuals were arrested after the Alabama Alcohol Beverage Control board raided a party at The Pines restaurant in downtown Troy. The party, reportedly hosted by Kappa Alpha Psi fraternity, had been approved by the university, Reeves said.

“It was a social event for the fraternity,” he said. “Any time a there’s an official function or we approve an event, we ask them to abide by the laws of the state.”

Lt. Thomas Price of the ABC said agents received a call a call Tuesday night that minors were consuming alcohol at a party at The Pines restaurant.

“Within two minutes of our going in the front door, we arrested the first person,” Price said about 7 a.m. Wednesday. “And we’re still counting.”

Price said early Wednesday he believed more than 300 people attended the party, although that number has not been confirmed.

“They were upstairs, downstairs, outside … even on the roof,” Price said, explaining that four individuals fled to the rooftop when the raid began. “Unfortunately, they couldn’t get back down the hole they used to get up on the roof, so we had to call in the City of Troy ladder truck to help them get down.”

In the state of Alabama, residents must be at least 21 years of age to consume alcohol. Price said anyone under of the age of 21 who registered more than 0.00 when the breath tests were administers was charged with consumption. While he didn’t release names of those charged, Price said the arrests included Troy University football players and female basketball players. He also said two juveniles – ages 16 and 17 – were involved in the raid.

“It was a dangerous situation,” Price said.

Reeves said the university was still investigating to determine which students were involved in the incident. Any who were charged would face the same disciplinary action, he said, which could include probation.

“We’re disappointed in the fact that a situation like this has happened,” Reeves said. “Our stance is that we ask our students to comply with the laws of Alabama.”

Price said the agency would pursue disciplinary action against the chapter and restitution for expenses incurred with the use of the city fire truck.

The Pines Restaurant could face citations, as well, Price said.

Price said the bust “is the largest in my 18 years with the state ABC board.”

Chief Anthony Everage of the Troy Police said those charged in the bust were being processed and released from the city jail early Wednesday morning.