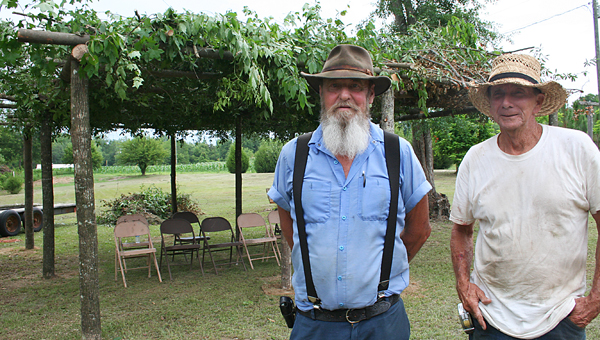 Dwight Berry, left, and Kimbel Adamson have built an 'Old Brush Arbor by the Side of the Road' at Little Sandridge. A Brush Arbor Meeting will be held at 7 p.m. nightly June 27-30. Everyone is invited to these old-time brush arbor gatherings that will include preaching and singing, both special music and congregational singing. Little Sandridge is located off U.S. Highway 231 south of Brundidge on Highway 123 north toward Ariton. (Photo/Jaine Treadwell)

Old brush arbors by the side of the road

Where I learned about salvation from the book of revelations

In an arbor by the side of the road

That old gospel song led Dwight Berry and Kimble Adamson to where they are today.

And, that’s beneath an old-fashioned brush arbor by the side of the road.

That brush arbor will be the site of an old-time Brush Arbor Meeting June 27 through 30 “by the side of the road” on Highway 123 north toward Ariton.

Berry and Adamson said that the idea for a brush arbor meeting came from God.

When Berry “got saved,” the Lord revealed to him that he should build a brush arbor by the side of the road.

“I’d been wanting to build an old brush arbor for several years but I was patient,” Berry said. “I knew that if I was patient the Lord would show me the time and place.”

But he kept that revelation to himself until a few months ago, when he “just happened” to mention it to his longtime friend, Kimble Adamson.

He really wasn’t “all that surprised” when Adamson told him that the Lord had put building a brush arbor on his heart, too.

The thought of building a brush arbor and holding an old-fashioned church meeting there had come to them both through the song, “Old Brush Arbors by the Side of the Road.”

Berry said that he heard that song for the first time a couple of months after he was saved and it stayed in his head and on his heart.

“On the television show, ‘Hee-Haw,’ they had a gospel group that sang the old-time music and they sang “Old Brush Arbors by the Side of the Road,” Berry said. “It really touched my heart so, when the Lord revealed to me that I was to build a brush arbor, I knew I had to do it.”

Adamson heard the old meetinghouse song for the first time at a gospel singing at his house.

“I just kept hearing the old song over and over in my head and that was confirmation of what the Lord wanted me to do,” he said. “The Lord will confirm what is to be and building the brush arbor is of the Lord.”

“Way back, preachers would throw up brush arbors by the side of the road, especially along dirt roads where the people that passed by might not have a chance to go to church often,” he said.

Berry said the brush arbors were inviting to those who preferred the informality of the worship setting.

“Some people didn’t want to go inside a church building because they didn’t feel comfortable there for different reasons,” he said. “It was different under a brush arbor. It was a more natural setting and people just felt comfortable there.”

Last Friday, Berry and Adamson and a helper or two, set the posts, built the overhead frame and cut limbs and bushes to provide the top cover.

“Early on, brush arbors were needed because services often went on all day and into the night,” Berry said. “Most of the brush arbor meetings were in the summer. The brush arbor provided protection from the sun and from summer showers.”

The Brush Arbor Meeting services at Little Sandridge June 27 through 30 will be at night so the brush arbor is symbolic but Adamson and Berry believe that the spirit of the old time brush arbor meetings will be felt night after night.

The Benton Brothers will present special music and there will be congregational singing nightly.

“The Old Brush Arbor by the Side of the Road” is located off U.S. Highway 231 South of Brundidge. Take a left just across the Pea River Bridge onto Highway123 north. The brush arbor is on the left.