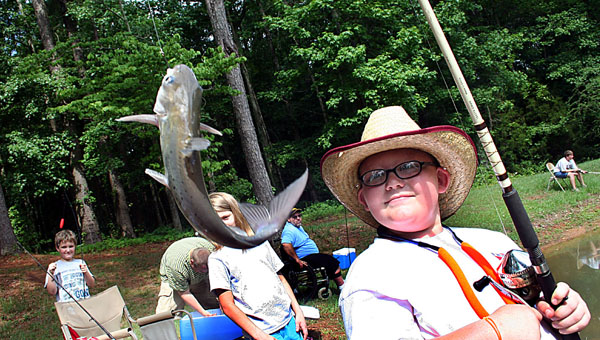 Denver Thomas brings in a fish during the Pike County Kids' Fishing Day at Clay Hill Farms. Fifty kids between the ages of five and 12 participated in the annual event. (Photo/Jaine Treadwell)

For Richard (RC) Eagerton, it was his first fishing adventure.

And, for a while, RC looked wide-eyed as other young fishermen pulled in catfish of various sizes. With each excited yell that signified yet another one caught, RC looked wishfully at his “bobber.”

After a long while of little boy patience, RC’s bobber jiggled, bobbed a time or two and then went under. A few turns of the reel and RC brought in his first catch ever.

The scenario was probably played out several times at Pike County Kids’ Fishing Day on Saturday at Clay Hill Farms near Pronto.

Fifty youngsters between the ages of 5 and 12 participated in the annual free fishing day for kids hosted by John and Carol Dorrill, owners of Clay Hill Farms and sponsored by Wal-Mart and the Alabama Wildlife and Freshwater Fisheries Division.

For some youngsters, the event was their first fishing experience while others like Denver Thomas are rather experienced fishermen.

“Fishing is my best subject,” Denver said, with a big smile. “I like to fish and I go every time I get a chance. We go fishing at the river and in fishponds. I’ve been to Kids’ Fishing Day for four years. It’s a lot of fun and I always catch a lot of fish.”

For Denver, that was no brag, just fact. In fact, Denver was the top fisherman with 10 fish weighing in at 7.3 pounds.

RC did pretty good himself with three fish that weighted 3.5 pounds.

Jordan Stanford knows all about sportsmanship and he looks forward to eating his catch as much as pulling the “cats” in.

“I mostly fish with my dad and my uncle,” he said. “They take me to the Conecuh River and to Pike County Lake and we catch different kinds of fish. But I like coming out here because there are a lot of kids and that just makes it more fun.”