Hall, Miller first to talk with school board 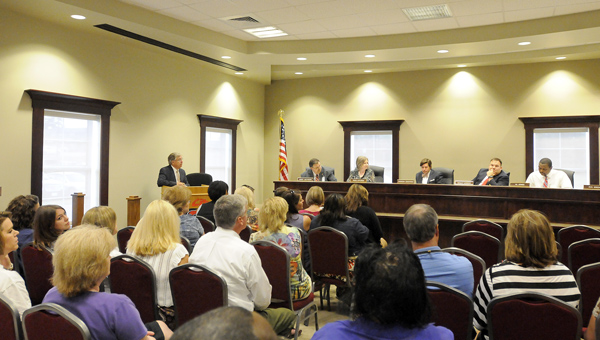 Dr. Mike Hall answers a question during an interview with the Troy City Schools Board of Education in Troy, Ala., Thursday, June 16, 2011. Miller is one of five finalist for the superintendent job. (Messenger Staff Photo/Thomas Graning)

Dr. Alan Miller challenged school board members on Thursday to craft their vision for the Troy City Schools.

“Think of a little girl walking into Troy Elementary 60 days from now … what do you want for her years from now when she walks across that stage? What kind of education do you want her to have? …

“That’s the importance of the decision you will make.”

Miller, director of special education for the Eufaula City Schools, was the second candidate to interview on Thursday for the superintendent position. Dr. Mike Hall, principal of Pike County High School, was the first.

“This is a job I’ve always wanted, from the day I started my first class and Willie Thomas was principal,” Hall said. “I have wanted this moment, trained for it, gone to school for it.”

Hall, who has lived in Troy for 32 years and been in education for 21, said his 12 years with the Troy City Schools as a teacher, coach and building principal give him a unique insight into the district. “I was here 12 years ago; I know what the potential is,” he said.

After the public interview, he added that “Gloria and I eat at (Country) Kitchen, we go to the First Baptist Church … I know (these people) on a first name basis, and they know me.”

Hall and Miller were both presented a slate of 14 questions during the hour-long public interviews. Topics ranged from what candidates see as their biggest challenges to assessments of the district’s strengths to understanding how the board and superintendent relationship functions. While more than 50 people crowded the board room during Hall’s interview, about 30 remained for Miller’s. The public was not allowed to ask questions during the interview process, but board president Roxie Kitchens said some of the questions submitted by the public had been incorporated into the board’s questions.

Hall said the biggest challenge for a new superintendent would be “a matter of trust. Trust must be earned, and it’s not something that can happen overnight.”

Hall also stressed the importance of building relationships with city and county government and economic leaders to grow and develop the school system in a way that benefits the entire community. “We have tremendous resources right here in our back door at Troy University,” he said. “We need to develop partnerships with the economic council … with local businesses … with city and county government.

“It’s a revolving circle and one is just as important as the other.”

Miller earned his bachelor’s degree at Auburn University and spent five years in the U.S. Army, including two tours in Korea, before deciding to pursue education as a career. “It was during my second tour in Korea that I had an opportunity to teach conversational English, and I fell in love with teaching.”

Miller said he attended graduate school at Troy University, “where I worked in the community, and loved the community” and spent five years teaching special education in Russellville. He spent two years as an elementary principal – “and it’s certainly one of the most difficult jobs, to be a building level principal” – before moving into central office administration. He has completed the superintendent’s academy at the University of Alabama.

And, he said, the biggest challenge facing any new superintendent is a matter of timing. “Sixty days is going to be a challenge,” he told board members. “In 60 days, you’re going to have 2,000 smiling little kiddos walking through the doors, and you’ve got to be ready.”

With the hiring of two new building principals this summer – both the middle school and high school positions are open at the moment – Miller said building those relationships and getting building principals, teachers and facilities ready for the first day of school will be imperative.

“And on the 61st day, you’re looking at something different … at the challenges that lie ahead as you go on to build something.”

That something is a vision Miller said that will write the future of the Troy City Schools. “I truly believe this district is at a very important point in time,” he said. “The future is yet to be written. Instructionally, there are some areas of real strength … the graduation rate is improving and the ratio of dropouts has stayed the course, even in these tough economic times.

“The middle and elementary schools are meeting and exceeding state standards instructionally. But when we look at performance of all of our kids in reading, in the high school for example, we’re just barely meeting that standard. I believe we should more than meet it … the standard makes you a good school. We should be a great school.”

Miller also cited the district’s drop in enrollment – some 200 students over the course of five years. “We need to explore that and look and areas where we can work on that.”

Miller also talked about the need for innovation in the district. “The state of Alabama put out innovation grants recently and only two districts applied for them,” he said. “Why can’t we do that here? There’s no reason the Troy City Schools, with a university and a city so supportive of us … can’t be a model district.

“There’s nothing limiting us but us.”

Interviews with the remaining three candidates for the job will take place next week:

to review the interviews.