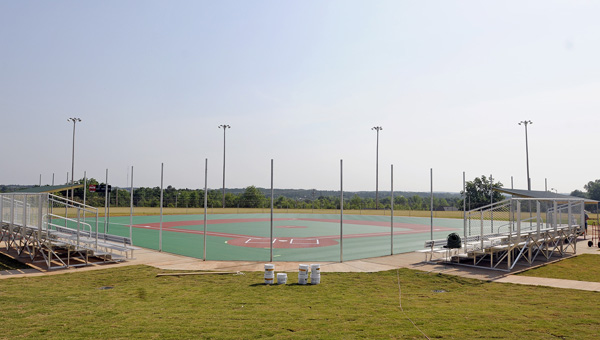 The Miracle League Field is seen at the Troy Sportsplex in Troy, Ala., Wednesday, May 25 2011. (Messenger Staff Photo/Thomas Graning)

The motto of the Miracle League is “Every child deserves a chance to play baseball.”

That chance is here and now in Troy.

Tonight, following the opening ceremonies at 6:30 at the Troy Recreation Park, the Angels and the Braves will take the “Miracle League Field” and, for many of the players, this will be the first time they’ve played organized baseball.

“And, more than likely, tonight will be the first time that anyone has ever cheered for most of these players in a game,” Smith said. “It’s going to be a great night and a great game.”

Tonight’s Miracle League game will be one inning as opposed to the two-inning games that are played during the “regular season.”

“We have two teams of 12 players each,” Dan Smith, Troy Parks and Recreation director, said. “There are some modifications to the game. There is no age limit and we have players as young as five and a couple over 40. There are no umpires and no outs so every player bats and every player scores. The last batter hits a home run, every time, to clear the bases.”

Dr. David Runyon is the coach of the Angels and Shane Brown coaches the Braves.

The Miracle League employs the buddy system and each player has a “buddy” with him or her at all times.

Tonight’s buddies will be from CGI and members of the 2009 Pre-Minor tournament team.

“There will be three more games, each at 6:30 on Thursday nights at the Miracle League Field,” Smith said. “We need a buddy for each of the players for the rest of the season.”

If local businesses, clubs or individuals would like to be a buddy for one of the 24 Miracle League players, let Smith know by calling 670-6067.

The Troy Miracle League Field was four years in the making and the idea originated with the Troy Lions Club.

“We are so thankful to the Troy Lions Club for expressing an interest in a Miracle League Field and for getting the ball rolling and to the many, from youngsters to adults to businesses and organizations, for their support,” Smith said. “Every contribution, whether it was one dollar or one thousand dollars, was just as important. It took every dollar to make this happen.

“There are only a handful of Miracle Fields in Alabama and that speaks volumes about the love and compassion the people here in Troy have for everyone in our community. When we handed out the jerseys Tuesday, there were smiles everywhere.”

Sheldan Sanders was among the happy players but he isn’t a first time baseball player.

He has been playing with a Miracle League team in Montgomery and he and his parents, David and Sheila, are happy to have “home field advantage.”

“Sheldan is one happy little boy that he doesn’t have to travel to play baseball,” Sheila Sanders said. “David and I are so humbled that the people of Troy and Pike County and (former) Sen. Wendell Mitchell supported the Miracle Field. It’s wonderful to know that people do care about all of our children and adults.”

“David said that it felt so comfortable to be here in Troy with parents and children that we know,” Sanders said. “All of us coming together made it more perfect. The kids were super excited to get their uniforms and we were excited to be a part of such a great group of people. Having a Miracle Field here is an amazing thing. We are so thankful and so happy. It was a long time coming but we know it will be worth the wait.”