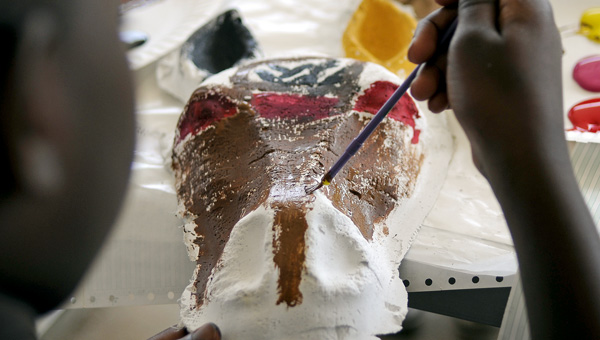 Seventeen students from across the county are participating in the Think/Write program at Troy Elementary School this week.

The Think/Write Program is sponsored by the Wiregrass Writing Project and the Troy University In-Service Center and is offered to students in grades two through nine.

“We put flyers in the different schools and the students who want to participate fill out applications and pay a $45 fee to attend,” said Dejerilyn Henderson, a Wiregrass Writing teacher consultant. Henderson and Tamara Herrington, who is also a Wiregrass Writing teacher consultant, are directing the program at TES. “The goal of the program is to increase the students’ thinking and writing skills through various activities. We chose to study the Continent of Africa and gave the students different prompts to think and write about.”

Henderson said the students chose a country in Africa to research and write about.

“In their research, the students found facts about their country – its geography, natural resources, population, president, major crops and other interesting information,” she said. “Then they were to put those in writing.”

Two writings from each student will be included in an anthology that will be complied and mailed to the students later this summer.

On Tuesday, the students made masks of different animals of the African savanna – lions, giraffes and zebras – and by Wednesday, their masks had dried and were ready to paint.

Today, the students will visit Troy University and have an opportunity to use computers to complete some of their writings. However, most of the students’ writings are done by hand.

Henderson said the Think/Write program is a valuable tool for teaching better thinking and writing skills and is also an opportunity to develop social skills.

Henderson expressed appreciation to the sponsors who made scholarships available to several students.

“We what to thank the Troy United Women’s League, Dr. Linda Felton-Smith and Wal-Mart for their support of the Think/Write Program,” she said.