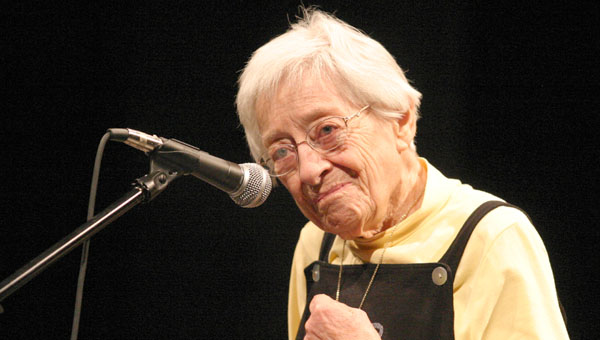 Kathryn Tucker Windham recites a tell during one of her last visits to Pike County. Windham was a popular participant in the We Piddle Around storytelling events. (Photo/Jaine Treadwell)

“Miss Kathryn’s” handmade pine coffin was gently and lovingly placed at the gravesite where family and friends had gathered for the early morning service.

The minister said kind words about the legendary Alabama storyteller but, then, there is nothing but kind words to be said.

He talked about the things that “Miss Kathryn” held in highest regard – relationships with family and friends – and the two things that we all have in common – life and death.

“Miss Kathryn,” he said, didn’t fear death. She viewed it as a new, exciting adventure and “lived into it.”

As the coffin was lowered into the ground, family and friends played “I’ll Fly Away” on combs as, “Miss Kathryn” requested. Then, they took turns with shovels and closed the grave of one whose legacy will live forever.

“Kathryn always said that nothing last forever except love and the love for her will live on through her stories and the thousands of stories she inspired in others,” said Charles Adams of Troy, a longtime friend of Windham.

“It was important for me to attend Kathryn’s burial,” Adams said. “I met her in 1968 at the ‘Horse Pens 40’ arts and crafts show. She was working for the Birmingham News at the time and we’ve been friends ever since. I just had to be there.

“Kathryn was a legend in her own time but more importantly, she was a good friend to me, my wife, Mary, and all of our children for a long, long time.”

Mary Adams said that anyone who has heard Windham on stage probably heard her tell about how she went to a Selma funeral home to make arrangements for her own burial.

“She said she could make a good down payment on a car for what they were asking for a casket,” Adams said. “So, she had one handcrafted and stored it in her garage until it was needed.”

It was needed on June 12, 2011. Windham passed away at age 93 at her home in Selma on Sunday and was buried on Monday at New Live Oak Cemetery.

“The burial was just as Kathryn wanted it, and it was a beautiful service for a most wonderful and amazing woman,” Adams said.

Windham is no stranger to the people of Pike County. Although many have known her over the years as the “Ghost Lady” and/or the author of “13 Alabama Ghosts and Jeffrey,” in recent years, she has been a favorite storyteller at the We Piddle Around Theater in Brundidge, as she was at storytelling events all across the country.

“Kathryn Tucker Windham was not only a great storyteller,” she was an outstanding person,” he said. “She had a tremendous impact as a storyteller and as a personality. Once you heard her, you wanted to hear her again and again. She also inspired people to go and tell their stories. There will never be another like her.”

Melissa Scarbrough of Troy had a rare opportunity to eat “supper” with Windham. Scarbrough was a volunteer at the Chili Country Christmas storytelling at the We Piddle Around Theater in December 2009 and was invited to “sit down” with Windham.

“Kathryn Windham’s stories went straight from her heart to yours,” Scarbrough said. “She was real and honest. There was nothing pretentious about her. She was a master storyteller. She would have the audience sitting on the edge of their seats hanging on her every word. It was such an honor for me to get to know her. It’s something I will always treasure.”

Scarbrough said that Kathryn Windham was greatly loved and will greatly missed, but “the party in heaven has begun.”