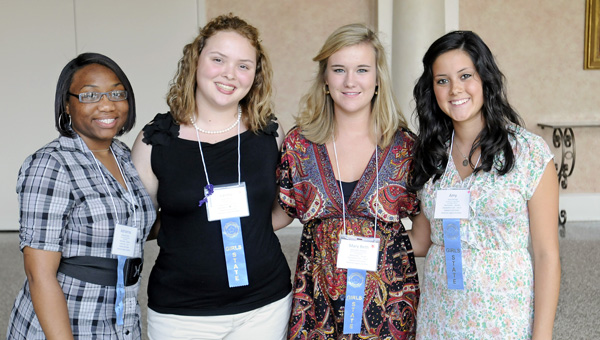 Fleming, a rising senior at Pike Liberal Arts School, said she has enjoyed her experience at Girls State.

“We are all very much involved with our schools and work hard to make good grades,” Fleming said. “I think people here are set at a high standard.”

The four student delegates agreed it was “nice to be around like-minded” girls and a big part of the weeklong experience was the forging of new friendships.

“It’s a wonderful learning experience,” Fleming said. “A positive aspect of all this is meeting new people and gaining friendships. There’s a counselor here this year that I’m really good friends with. She came two years ago and one of the girls she met at Girls State, she roomed with in college.”

“It always helps to make yourself a bit more outgoing,” Fleming said. “It always helps to meet new people. I feel like some of the girls I’ve already met have become close friends. I have exchanged phone numbers with many of the girls I have already met and feel like if I needed their help, then I could call them and sometime in the future I would help them as well. Relationships are definitely an important thing.”

Wasden, a rising senior at Charles Henderson High School, said she has enjoyed the learning experience.

“We have a mock House and Senate, we go through bills and debate them just like they do in the real Legislature,” Wasden said. “I think this experience has expanded my horizons. I never thought I could be interested in politics. It has definitely made me reconsider that.”

“I’m very interested in it,” Darby said. “I’m learning things I didn’t know about before.”

Battles, rising senior at Goshen High School, said she feels Girls State will be instrumental in helping her reach her future goals.

“I think I’m going to be a Child Development Specialist,” Battles said. “To me, you don’t learn just about general laws and stuff, instead you learn about people’s ideas and how they feel about certain things.”

Barbara Patterson, director of student involvement and Girls State counselor, said the week-long programs, which are for rising seniors specially selected from their high schools, are based on giving the students a model of government that they build –city, county and state – and then they run it during the week. Patterson said the students also form political parties, eitherthe Nationalist Party of the Federalist Party, and have a House and a Senate.

“The students build these governments, run them and do legislation – all those types of things,” Patterson said. “They get a first-hand experience in government.”

Patterson has been active in the Girls State program as a counselor for more than 15 years and believes the program instills great values and lessons in the leaders of tomorrow.

A worker with Southeast Alabama Gas District works to close a break in a gas line near the intersection of... read more