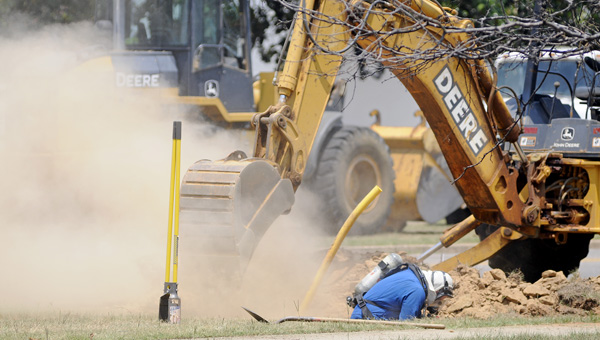 A worker with Southeast Alabama Gas District works to close a break in a gas line near the intersection of Park Street and University Avenue in Troy, Ala., Thursday, June 9, 2011. (Messenger Staff Photo/Thomas Graning)

Ronnie Rainey, service representative for the Southeast Alabama Gas District, said a construction company was attempting to dig up a water valve and accidentally cut into the gas line.

“They hadn’t called me about locating the line and cut the gas line in two,” Rainey said. “A construction crew is coming from Enterprise to put it back together. It’ll probably take an hour or so to get the gas cut off and a couple of hours to get the line put back together.”

Mike Davis, water and sewer superintendent for the city of Troy, said Blankenship Contracting, from Enterprise, repaired the line in a timely manner.

“We have a contractor that’s doing the water system improvements, which is laying the new water main, and they were actually going and checking where they would be putting valves and locating utility services — gas, water, or anything else following,” Davis said.

The work is part of a $6 million infrastructure improvement project that includes the addition of a 12-inch water main running from Brundidge Street to George Wallace Drive. Work on the project began this week.

“Before (checking where we would put valves) we always do a 24-hour call notice on all utilities to make sure the gas is marked, the phone is marked, electric is marked and water is marked. They were digging and, unfortunately in that area, our contractor didn’t know there was gas there, because it wasn’t marked.”

Davis said when the contractors saw there were no marks indicating there was a gas line, they began to dig.

“The gas company thought they didn’t need to mark past University Avenue and Park Street, so they didn’t mark that side,” Davis said. “So, our water contractor hit in and sometimes those things happen.”

Davis said the two-inch gas line was repaired by late Thursday, and everything is “back to normal.”