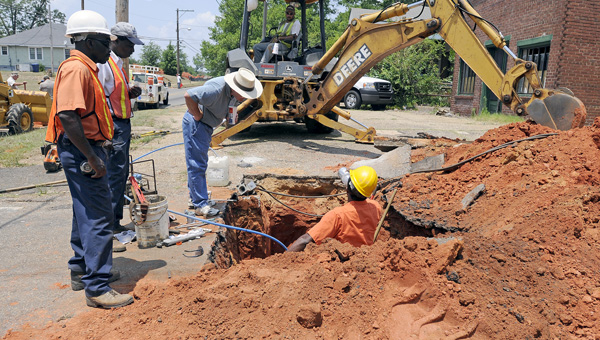 Workers work on a water line at the intersection of South Brundidge Street and Smith Street in Troy, Ala., Wednesday, June 8, 2011. (Messenger Staff Photo/Thomas Graning)

Drivers encountered what will become a familiar sight on Wednesday as two major infrastructure improvement projects get under way on Brundidge Street.

“Brundidge Street is going to be messed up between now and the end of the summer,” said Mike Davis, water and sewer superintendent for the city of Troy. “We’re going to try to do our best to have at least one lane of traffic open at all times.”

Work began this week on the installation of a 12-inch water main, part of a $6 million sewer and water infrastructure improvement project. The project will continue from Blackmon Street to Center Street, down Park Street to Elm Street and end at George Wallace Drive.

Complicating the project on Wednesday was an unexpected water line repair, Davis said.

“The water main work on Brundidge Street is going to take three weeks to a month,” Davis said.

After that is completed, work will begin on a project designed to widen and resurface Brundidge Street. “After the water main gets in the ground will be the relocation of the gas and electric poles an then the street widening,” Davis said.

Throughout the dual projects, Davis said his goal as coordinator for the city is to keep at least one lane of traffic open at all times on either Brundidge or Park Street.

“We are trying our best, working with multiple projects, to make sure the residents of the city of Troy are affected as little as possible,” he said.

But he said drivers also should be prepared for inconveniences and should plan ahead.

“If you can avoid Brundidge Street on Monday through Friday, during the work hours of 7 a.m.. to 6 p.m., then please do so,” he said. Residents who typically use Brundidge Street for access to downtown Troy areas could use an alternate route by taking Thompson Street to Park Street to University Avenue.

“In order to make the improvements the city of Troy needs, we’re asking people to cooperate with us through this,” Davis said.