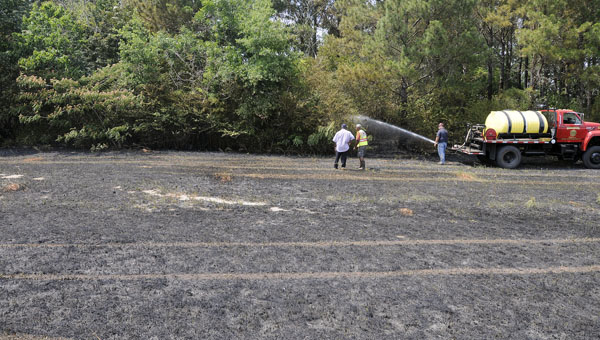 Firefighters work to contain a brush fire in Brundidge, Ala., Tuesday, June 7, 2011. The fire, thought to be caused by a cigarette, consumed two acres of land. (Messenger Staff Photo/Thomas Graning)

You might want to think twice before you start that campfire.

The dry conditions throughout the state have created an atmosphere where the “probability of catastrophic wildfire activity” is extremely high.

The Alabama Forestry Commission reports that since January, 1,808 wildfires have burned over 41,000 acres in Alabama.

“The lack of rain and unseasonably high temperatures have left much of the state extremely dry, creating high risk potential for devastating wildfires,” Bentley said, in a press release. “As Alabamians are recovering from the tornados that moved through the state in April, it is important that debris not be burned. We must take every precaution necessary to avoid the start of a wildfire.”

“The reduced availability of suppression resources, combined with the large amount of timber that was downed by the recent tornados, extremely high temperatures, and low relative humidity increase the risk for catastrophic wildfires.”

Bentley’s declaration makes it illegal for a person to set fire to any forest, grass, woods, marshes, to build a campfire or bonfire, or to burn trash or other material that may cause a forest, grass, or woods fire.

According to local authorities, the fine for violating the “No Burn Order” is up to $500 and a possible six-month jail sentence.