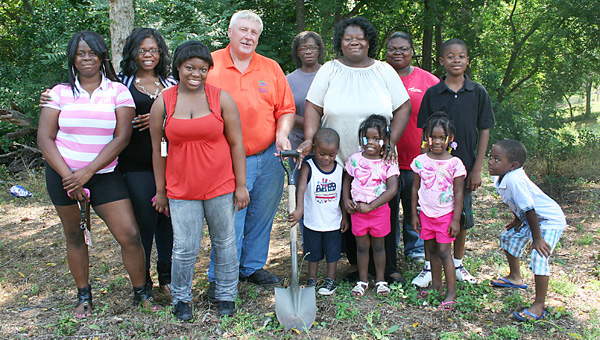 Ground was broken for the 12th Habitat for Humanity House to be built in Pike County Wednesday morning.

The first shovel of dirt was moved on the former Pennington property on Martin Luther King Jr. Drive in Troy with the Pennington family that will occupy the home participating.

Alberta Pennington, a single grandmother and the matriarch of a family of 10, expressed joy and excitement at the probability of having a home of her own.

“I’ve never had my own house before,” Pennington said with a smile. “We’re all living in a three bedroom trailer and, with 10 of us, it’s mighty crowded in there.”

Pennington is a retired correction officer. Her daughter was killed in a car accident in 2008 and she is raising her two sons, ages six and 11.

Two daughters, ages 18 and 19, live with her and five other grandchildren – four-year-old twin girls, a three-year-old grandson and granddaughter and a 10-month-old grandson.

“We’re all so happy to know that we’ll soon have a house,” Pennington said. “Back in 2008, not long after my daughter was killed, I saw in the newspaper that they were taking applications for a Habitat House and I applied.

“I’ve always dreamed of having a home of my own and I thought – I hoped — that maybe I would be eligible. But for a long time it seemed like my dream would be just a dream. But now, three years later, my dream is coming true.”

The Pennington family knows that a home of their own is still months away but that’s a wait they don’t mind one little bit.

Fred Johnson, executive director of the local Habitat organization, said a Blitz build will be scheduled after the beginning for the university’s fall semester.

“We really depend on Troy University students to help us so, we’ll wait until they get back,” Johnson said. “Maybe by then it will have cooled down a little.”

Pike County Habitat for Humanity has 11 homes in the county and hopes are to build many more because there is a great need, Johnson said.