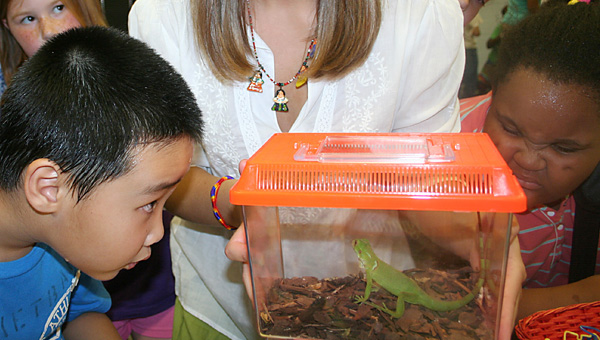 Daniel Niu and Karneshia Davis got a close-up look at a lizard during the Summer Library Program at Troy Public Library this week.(Photo/Jaine Treadwell)

Library program gives youngsters a chance to explore the world

The children who are participating in the Summer Library Program at the Troy Public Library were issued personal passports for a trip around the world Tuesday afternoon. Delta Airlines issued them their wings so they could make the trip in time for their parents to pick them up an hour later.

“The children had a wonderful time traveling the world,” said Teresa Colvin, children’s librarian. “We traveled to Korea, Italy, China, India, Russia and Mexico and learned about the cultures in each of those countries.”

The children learned about Russian matryoshka or nesting dolls, which are colorful, hand painted dolls of decreasing sizes that fit inside one another.

They learned about the ancient Roman Colosseum where gladiators often fought for their freedom.

They learned about pythons and iguanas that inhabit Mexico and how Chinese eat rice with chopsticks.

“The children learned amazing facts about the different countries from volunteers who dressed in the native costumes and spoke the native tongue,” Colvin said. “Our theme for this summer’s library program for our six through 11-year-olds is ‘Around the World in Eighty Days.’ They did take a trip around the world and it was an exciting adventure for all of them.”

Colvin said today’s world is truly a “small world” and it’s important of children to be exposed to different cultures.

“Today’s travels were fun and educational and hopefully will encourage the children to want to know more about life in other countries and learn more by reading,” Colvin said. “Next week, we’ll bring in critters from around the world and that’s one of the children’s favorite programs. On June 21, we’ll have Craft Day from Around the World and each child will have an opportunity to make up to four international crafts.”

On June 28, the children will discover Wayang, the ancient art of shadow puppet theater.

“This will be a new type of puppet show for the children and it’s one they will really enjoy,” Colvin said. “I want to remind all of those who are participating in our reading program that reading logs are due by July 12. So, keep reading because reading will take you anywhere in the world you want to go.”