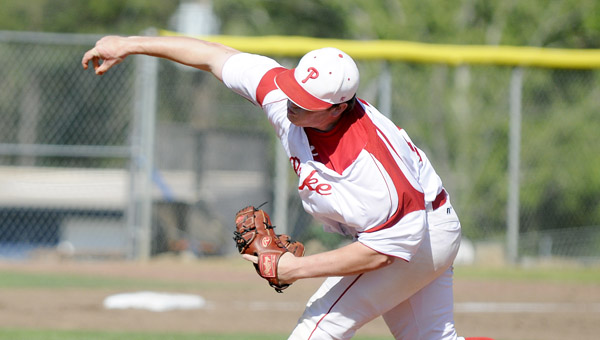 For the second-straight year, Will Starling and Ross Hixon found themselves in a state title series.

While it may have taken a year longer than they would have liked, both Starling and Hixon finally got the championship they had been chasing for three years.

Until this year, the two baseball players were key pieces for the Pike Liberal Arts baseball program.

And even though the former Patriots’ efforts to win a AISA title fell short in 2010, that would not be the case with their new team, the Southern Union Community College Bison in 2011.

Earlier this month at Eagle Stadium, in Ozark, thanks to an 8-1 victory over Faulkner State Southern Union was able to clinch its first ever Alabama Community College Conference state championship.

The victory awarded the Bison its first ever a berth in the National Junior College World Series in Grand Junction, Colo., as well.

In the title-winning game, it was Starling who pitched a complete game, giving up the lone run, while striking out 10.

“I wanted to be in that position,” he said about pitching in the deciding game. “That’s what I have been playing baseball all my life for – playing in big games.

“I’m glad (head coach Joe Jordan) had the confidence in me to win that game. Winning that title was a great feeling. This has been a pretty exciting year so far.”

Now, the two find themselves on their level of baseball’s biggest stage in a part of the world they have never been before.

And even though that sounds like a plot line for a movie, both say they are enjoying the ride the sport has given them so far.

“To be here in this moment has kind of already hit me already, but only because it’s baseball,” Starling said, “this is what I have been doing all my life.

“It’s always been my dream to be able to go to different places to play baseball. So I am kind of living out my dream.”

There is another aspect to this situation that each is not trying to dwell on too much.

“All this can be a little intimidating at times,” Hixon said. “There are a lot of pressures with this, but it’s just another baseball game. Every team is going to be good up here, but so are we. We just have to play our game.”

For Hixon, this is not the first time baseball has taken him to exotic places.

Before this Colorado trip, Hixon has been a part of teams that played in both Hawaii and Las Vegas.

“It’s definitely been a little hectic, but in the end, it’s worth it,” Hixon said.

“We get to come out here for a chance to win the World Series. It hasn’t really sunk in yet, but we are all having a good time.”

As it enters the World Series, Southern Union has posted a 42-18 overall record.

But success, no matter the level, is something that both former Patriots have become somewhat used to, thanks to their time at PLAS.

The two excelled on the baseball field, as they helped the Patriots win over 60 games in three years.

And all those seasons playing at Butch Austin Field have prepared them for anything.

“I have tasted defeat before, so I am not to worried about losing,” Hixon said.

“Coach Butch has really taught me a lot, and I would go back to play for him any day. You can’t replace those times, but pretty much everything that Will and I have learned came from our high school days. We were used to winning at Pike, and I guess we just carried it over.”

Unlike their times with the Patriots, both players are strictly pitching now.

In high school, Starling was a pitcher and first baseman, while Hixon was the second baseman and pitcher.

“Things are definitely different than how they were (in high school),” Starling said.

“Baseball is more like a job now. It’s been every day since August 15, but it’s been a great experience that I have learned a lot from.”

Today, both will do what they can to help the Bison advance from a first round matchup against Navarro College, with a first pitch set for 3 p.m. MT.

“It’s just another game,” Starling said. “That’s what I have been thinking. I’m just going to do what I have done a thousand times before and go play.”

Games will be streamed live at http://www.jucogj.org/.