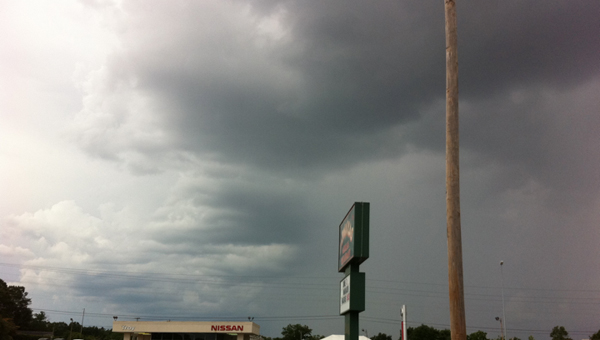 Storm clouds gather over the US Hwy 231 North area in Troy, Ala., Thursday, May 26, 2011. (Messenger Staff Photo/Thomas Graning)

Pike County residents got a surprise Thursday afternoon as thunderstorms came rolling through the area.

“The Storm Prediction Center had just about the entire state of Alabama under a slight risk today,” Jeanna Barnes said, EMA director. “We’re under a severe thunderstorm watch until 5 p.m.”

Rain reduced visibility significantly along South Brundidge and pea-sized hail could be seen and heard pelting the glass doors of the Messenger newsroom.

Barnes said there were reports of quarter-sized hail in Troy’s downtown area.

There were also reports of power outages around the 2nd Avenue area.

A spokeswoman from the Troy Utilities Department said units were out trying to restore power in several places around town.