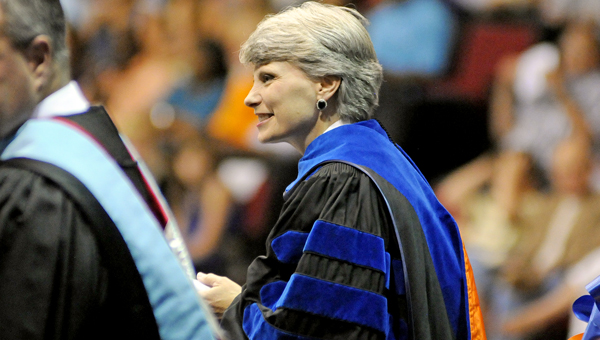 Charles Henderson High School principal Dr. Kathy Murphy prepares to present a diploma to a graduate during the 2011 CHHS graduation in Troy, Ala., Thursday, May 26, 2011. (Messenger Staff Photo/Thomas Graning)

Troy City Schools may be adding high school principal to the list of open administrative positions.

Dr. Kathy Murphy, principal at Charles Henderson High School, on Thursday was offered the job of superintendent at the Monroe County Schools.

“We have not finalized a contract at this time,” Murphy said. “I certainly need to get some negotiations going on. But we’ll see if we can reach an amicable agreement soon.”

Murphy came to CHHS in the summer of 2010, having worked in the Greenville School District.

“I have really mixed feelings about this,” she said Thursday, as she prepared for graduation ceremonies. “I love Troy. It has been a fabulous experience for me. I absolutely love Charles Henderson High School: those kids and those teachers. But I haven’t been bashful in saying I want to be a superintendent, and the timing was such that I applied when this superintendent position opened and they moved quickly.”

Monroe County Superintendent Melanie Ryals announced in April she would retire after 33 years in education. The school board opened applications and narrowed the field to 11 candidates, with interviews beginning May 19. The board met Thursday morning and voted to offer Murphy the contract. “They moved quickly,” Murphy said.

Murphy, who has 27 years experience in education including 15 as principal in both high school and middle school settings, also had applied for the open superintendent position in Troy City Schools. She was among five finalists selected by a search firm in the first round of the application process, but the school board voted in April to reject the search committee’s results and reopen the application process. The board is scheduled to meet June 6 to review the applications.

The Troy City Schools also are seeking a new principal for Charles Henderson Middle School. Delyn Bouldin, who also was hired in June 2010, is moving from the campus position to a central office position.

Interim Superintendent Jimmy Mathews said earlier this week the district had received more than 40 applications for the middle school position, and he hoped to be able to present a recommendation for hiring to the school board at its June 20 meeting.