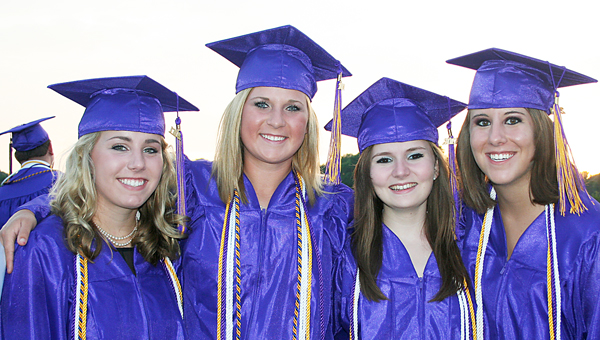 As the sun set on a warm May evening, the Goshen High School Class of 2011 waited to hear the first bars of “Pomp and Circumstance” and to begin the walk into the waiting world of adulthood.

“I don’t know whether to be nervous or super excited or sad,” said Kaitlin Thomas. “Probably sad. We won’t know what to do with ourselves.”

The classmates who clustered around Thomas all expressed the same feelings and then the music began and, with sighs, they began the walk toward a new beginning.

Summer Faulker, class salutatorian, reminded her classmates that the time together was almost done.

“We often wonder where the time has gone,” she said. “We are at a turning point in our lives. We are no longer young adults. We are men and women.”

Faulkner said what the Class of 2011 has experienced at Goshen High School has made them wiser and stronger and confident in the future.

“What we have learned has set forth stepping stones for us and given us a strong foundation and prepared us for future endeavors,” she said.

She then challenged her classmates to always give themselves reasons to wake up in the mornings.

Valedictorian Wes Davis thanked God for His presence in his life and the parents of all the graduating seniors for their guidance, support and encouragement over the years.

“I congratulate all of my classmates on all that we have achieved,” he said. “And we must remember that success in life has nothing to do with monetary gains.”

Real success, Davis said, comes from doing the best at what they enjoy and what brings them happiness. He wished all of his classmates that kind of success in life.

Warren Weeks, GHS principal, told the 90th GHS commencement class that truth and honesty always prevail and wished them well as they leave Goshen High School and enter a new and exciting phase of their lives.

The Goshen High School Class of 2011 then took the solemn pledge to hold their diploma as a sacred trust, to honor themselves in all they do and to be loyal to their alma mater and their fellow men.

It was only then, that they were handed the scroll for which they had worked so diligently for 12, and for some, 13 years.

As the sun disappeared from the horizon, the Goshen High School seniors of 2011 were graduates and ready to take the giant step into the big, wide world of opportunity and challenges and, to a one, they were ready.