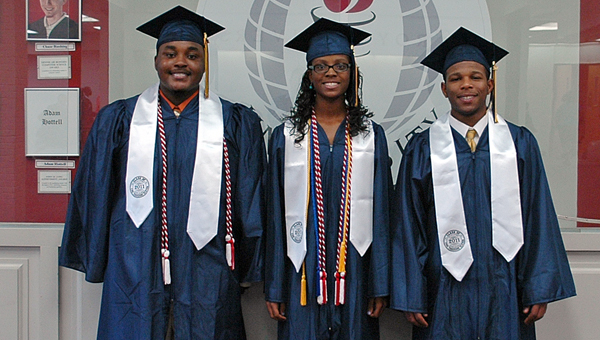 Otis Cotton Jr., son of Otis and Karma Cotton of Troy, said he plans to enlist in the United States Army and later hopes to obtain a degree in aeronautics and aviation maintenance and design.

“It feels good to be done,” Cotton said. “I plan on being an aircraft mechanic in the Army, then going to school paid for by the military.”

Cotton plans on being a part of the Reserve component of the Army and said his decision to join was made based upon lessons learned over the past four years.

“I’ve learned to be more responsible in what I do,” Cotton said.

Abrian Javon LaMardre’ Lee, son of Richard Lee and Melissa Siler of Brundidge, is enrolled at Enterprise-Ozark Aviation School and plans to work toward a degree in Avionics.

“I’d like to get on at Fort Rucker after I finish my degree, then later go to WyoTech down in Florida,” Lee said.

Lee said he has learned to study hard and to make right decisions, which is something he believes will carry him through his college career.

Briana Tynetta Siler, daughter of Annette Siler and Johnny Banks of Troy, said she is attending Troy University and will be pursuing a degree in business management with an emphasis in marketing.

“It feels awesome to be graduated,” Siler said. “I’ve been waiting for a long time. I would like to someday run a business, perhaps a clothing store.”

Siler said throughout her high school days she has learned to “let go and let God,” which she said has been instrumental in helping her through the more stressful times of high school and believes her outlook will help her on the road to success.