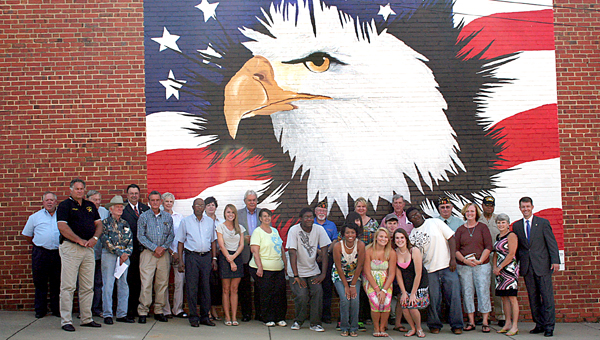 A dedication service was held for the patriotic mural on the outside wall of American Legion Post 70 in Troy on Wednesday afternoon.

Post Commander Bob McLendon addressed the gathering and said it took a talented group of art students to accomplish what had been talked about for a long time.

“This is an exciting day, for us,” McLendon said. “We talked about a mural for along time but never got it done until now.”

On behalf of Post 70, Jack Norton expressed appreciation to the Charles Henderson High School art students and their teacher Pam Smith for an outstanding job.

“I love their design choice for the mural,” Lunsford said. “It’s more than a pretty picture. It represents what I feel and what I think most of the people in our country feel. It really says something that makes you feel good inside.”

Smith said the mural project was one her students had looked forward to for some time.

Smith thanked Post 70 for providing breakfast for them on Saturday morning and said pancakes will even get young people out of bed and ready to work.

“The students even sang patriotic songs as they painted,” she said.

“I like for my students to be involved with organizations as great as this one and to be a part of the downtown revitalization effort.”

American Legion Post 70 presented a check in the amount of $500 to Smith to be used in the CHHS art program.

Smith expressed appreciation for the donation and said there are always things the art department needs. “Right now we only have one computer and I also teach graphic design and photography,” she said. “This will help to purchase another computer and may also be used for the travel abroad program that is offered each year.”