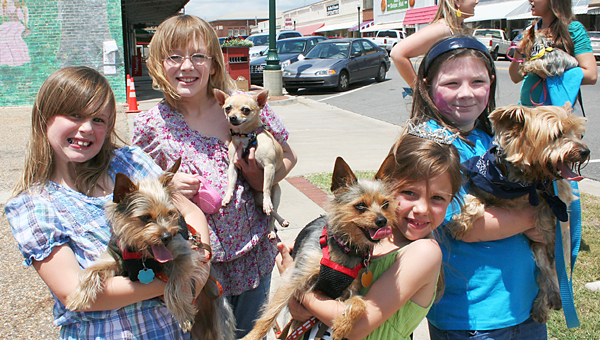 Photo/Jaine Treadwell A dog contest was just part of the fun offered at the inaugural Spring Fest in Brundidge this year. Organizers say this year's success prompted a decision to make it an annual event.

The success of the Brundidge Business Association’s inaugural Spring Fest event on May 14 prompted the BBA’s festival committee to declare Spring Fest to be an annual event in Brundidge.

Dixie Shehane, BBA president, said although the Spring Fest didn’t attract quite as many people as the committee had hoped, it was nonetheless an unqualified success.

“This being the first year, we were very pleased with every aspect of Spring Fest,” Shehane said. “There are a few things that need to be changed to better accommodate the vendors and the crowd but we’ll start planning now to do make those changes.”

Jimmy Hollis, vendor chair, said the response from the vendors was positive.

“We had a few glitches with the electricity but once we got that worked out, everything went smoothly,” he said. “I feel like most, if not all, the vendors will come back. For a first-time event, I think the vendors did good.”

The committee discussed whether to allow what might be called “games of chance” at future Spring Fests.

“According to our rules, no games of chance are allowed and that includes picking up ducks and games like that,” Hollis said.

After some discussion, the committee decided against any games left to chance.

The committee discussed having sponsored inflatable “toys” for the children and train, pony and wagon rides. The agreement was that Spring Fest should be a family fun day and not one that would drain the pockets of those who attended.

All committee members agreed that the entertainment will be central to the success of future Spring Fest events and much thought and consideration should be given to that phase of the festival.

Shehane said the success of Spring Fest 2011was due to the hard work and dedication of the BBA members, the assistance of the city, the festival sponsors, as well as the vendors and other participants and those who came to see what Spring Fest was all about.

The committee discussed the BBA’s next event, the Independence Day Parade, which is held traditionally on the last Saturday in June.

The Independence Day Parade is a huge event with between 80 and 100 entries. Entertainment and food vendors are also a part of the day’s activities.

The committee set the date for the annual Christmas Parade on Tuesday, Nov. 29 in downtown Brundidge.

“We hope to have a week of activities in Brundidge as we usher in the Christmas season,” Shehane said.

“The Brundidge Historical Society will have its annual Chili Country Christmas storytelling event at the We Piddle Around Theater on Dec. 2 and 3 and, hopefully, other events will be planned.”