Hope Griffin: Keeping calm in the midst of her work 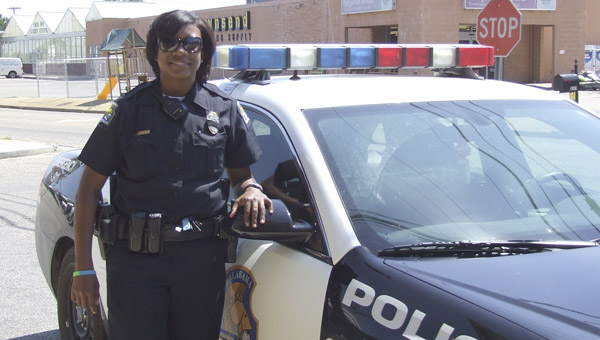 Hope Griffin said she was inspired to become a police officer after her mother went missing in 1999. She approches her work with compassion and a desire to keep calm in the midst of tense and difficult situations. Photo/Holli Keaton

Troy Police Officer Hope Griffin will be the first to tell you she’s not like all other police officers.

“I’m not a typical police officer — loud, arrogant, outspoken,” Griffin said. “I’m all for doing what’s right and doing it in a calm manner.”

In fact, as Griffin was working to become a police officer, she had to do so without the support of many others.

“I’m like the quiet storm. You don’t expect it, but I get in there and get the job done,” Griffin said.

Griffin had a very personal reason for deciding to enter law enforcement. “In 1999, my mom went missing, and it’s still undetermined what exactly happened to her,” Griffin said. “That made me want to pursue it.”

She also credits her father James Griffin with a lot of her inspiration.

“He always stressed the importance of a positive attitude, character and integrity. He taught me it’s not all about your looks but how you conduct yourself,” Griffin said. “He was so positive that he really did impact me a lot.”

Troy Police Chief Anthony Everage said there is no denying the positive outlook Griffin has inherited.

“She’s always smiling, has a really good outlook and deals well with the public,” he said. “She’s also a very compassionate officer.”

Griffin said her favorite part of her job is helping the elderly and children.

One of the hardest aspects is keeping herself calm in adverse situations.

“A lot of times when you go to calls, everyone is cursing and violent,” Griffin said. “Keeping myself calm and maintaining control of myself and my attitude is hard.”

“According to the report, she noticed a vehicle parked in front an Elm Street apartment with the lights still on and exhaust coming out of the tailpipe,” said Sgt. Benny Scarbrough, public information officer for TPD. “Now that’s a person who is really observant to be able to notice that while driving by.”

But, she doesn’t dwell too much on her accomplishments.

“It was good observation, I guess,” Griffin said. “If we can arrest somebody…get drugs off the streets, we had a good day, but there’s still more work to be done.”