Goshen defeats Ranburne in first round of state tournament 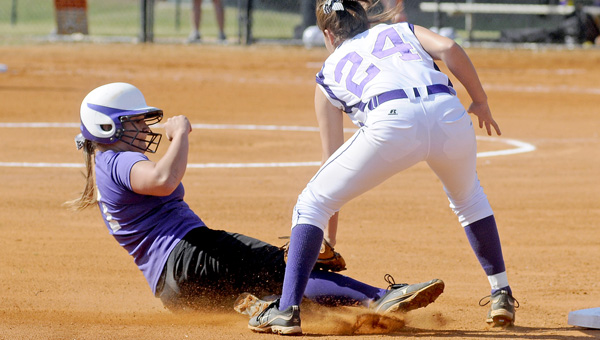 Even though this was the first ever appearance for Goshen softball in the state tournament, the Eagles started things off on Thursday morning unafraid and ready to play.

Two big offensive innings led to Goshen’s first win in it’s first ever game this late in the season, as the Eagles cruised passed Ranburne, 11-7.

“There was a possibility of them being nervous and playing like it, but they came in relaxed and played like they were supposed to be here. It was a great start to the tournament.”

While the Goshen defense kept Ranburne off the scoreboard in the first two innings, the same could not be said about the Bulldogs’ efforts in the field.

In the second inning the Eagles exploited both the Ranburne pitching and defense, as it sent nine batters to the plate, with six coming across the plate.

Amanda Griggs drove in the first run thanks to a bases loaded walk. Just two batters later, Goshen would get a big hit that would help open the flood gates.

It was the cleanup hitter, Rachael Senn that made sure the base runner would be sent home on a bases clearing double.

In the bottom of the fourth, the Eagles would again put runs on the board.

Kaitlin Thomas, Hayley Hughes, Ashely Tarver and Griggs all drove in runs thanks to two hits, a Fielder’s Choice and walk.

In the following inning, a Niyoka Slater triple would bring in another run to give the Eagles a cushioned 11-4 lead.

The offensive explosion would come in handy, especially towards the end of the game.

For the six innings, junior pitcher Alli Warrick and her defense kept Ranburne in check, giving up just four runs off of six hits.

Warrick ran into trouble in in the final inning, when the Bulldogs were able to rally for three runs off of three hits and error and a walk.

“I thought Alli pitched well all throughout the game,” Hughes said.

“She did struggle a little bit towards the end of the game, but I knew she was going to finish strong. She did a good job of keeping her composure and finishing off the win.”

All but three batters finished with an RBI in the win.

The Eagles will be back in action at 1:30 p.m. today against Lexington.