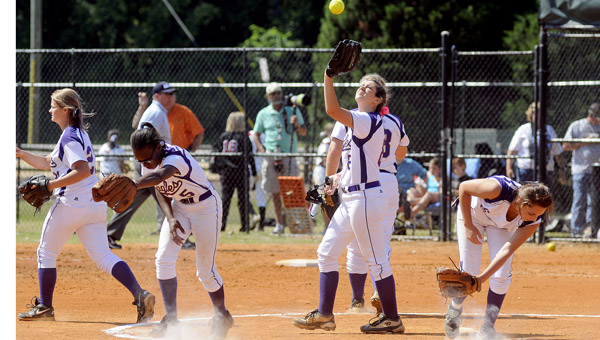 MONTGOMERY – While the Goshen Eagles were able to celebrate its first ever trip to the softball state tournament with a big first game victory Thursday morning, the visit ended up being shorter than the team would have liked.

The Eagle’s dreams of a winning a state championship were derailed thanks to consecutive losses at the hands of Lexington and Mobile Christian after starting off with a victory over Ranburne.

It was the offense that helped start the day off right for the Eagles, as Goshen was able to beat the Bulldogs 11-7.

That offense was a no-show for the remainder of the afternoon, as Goshen was shutout in the final two games, 6-0 to Lexington and 5-0 to Mobile Christian.

After scoring its final run of the day, in the bottom of the sixth inning against Ranburne, the Eagles were outscored 14-0 in the next 14 innings.

In the final two games, Goshen combined for just seven hits and 23 strikeouts.

“We saw two different pitchers in the last two games and that really made a difference,” head coach Dee Hughes said afterwards.

“Against Lexington, we weren’t swinging the bat and against (Mobile Christian), we were swinging to early. We came around late (in the final game) but just couldn’t string anything together.”

The loss ends one of the most successful seasons in the Goshen softball history.

The team finished with 30 wins for the first time ever, as well as a region championship and area championship for the second consecutive season.

“There is so much for this team to be proud of,” Hughes said.

‘This team made history with 30 wins and getting to this point. We played such a tough schedule, with 75 percent of our games on the road, but they never quit. I am so proud of these girls.”

Things started off on the right foot for the Eagles.

In it’s first ever opportunity to win a state playoff game, Goshen did so against Ranburne, as two big offensive innings led way to a 11-7 win.

“There was a possibility of them being nervous and playing like it, but they came in relaxed and played like they were supposed to be here. It was a great start to the tournament.”

While the Goshen defense kept Ranburne off the scoreboard in the first two innings, the same could not be said about the Bulldogs’ efforts in the field.

In the second inning the Eagles exploited both the Ranburne pitching and defense, as it sent nine batters to the plate, with six coming across the plate.

Amanda Griggs drove in the first run thanks to a bases loaded walk. Just two batters later, Goshen would get a big hit that would help open the floodgates.

It was the cleanup hitter, Rachael Senn that made sure the base runner would be sent home on a bases clearing double.

In the bottom of the fourth, the Eagles would again put runs on the board.

Kaitlin Thomas, Hayley Hughes, Ashely Tarver and Griggs all drove in runs thanks to two hits, a Fielder’s Choice and walk.

In the following inning, a Niyoka Slater triple would bring in another run to give the Eagles a 11-4 cushion.

All but three batters finished with an RBI in the win.

Game two was a different story, however.

Lexington High School and starting pitcher Tenna Patterson sank the Eagles’ hopes of staying in the winner’s bracket quickely, as the Golden Bear would win 6-0.

The first 10 Goshen batters Patterson faced struck out, seven of which on called strike threes.

It was not until the fourth inning when Vinson broke through for the first Eagle hit of the game.

“(Patterson) was the fastest pitcher we had seen all season long,” Hughes said.

“Our girls had a really difficult time catching up and making adjustments. Once we started hitting her, I think we rattled her a little bit, but by that point it was too late.”

On the opposite end, the Golden Bears got plenty of hits off of Warrick. In the third inning, Lexington struck gold, as it scored five runs off of five hits, two walks and an error.

“We just got the ball up a little too high and it didn’t matter if it was inside or outside, they were hitting it,” Hughes said. “We helped them out with several errors and whenever you commit errors, they are going to come back to haunt you.”

Errors would be a familiar theme for the Eagles in both losing efforts, unfortunately.

In both losses, Goshen combined for 11 errors, which scored four runs.

“There may have been some let down from (the Lexington loss),” the coach said, “and that’s what’s hard about tournament play – you don’t have time to rebound.

“Everyone saw we could make great defensive plays. We just were consistent enough.”

Again against Mobile Christian, Goshen failed to reach base the first time through the lineup.

The first hit came in the fourth inning off of the bat of Vinson.

The Leopards were able to take advantage of errors and well placed hits as it scored in the second, third, fourth and sixth innings.

The Eagles were able to get the bases loaded with just one out in the bottom of the seventh, however was unable to cut into the lead.

The loss brought the end of three Eagle careers, as Niyoka Slater, Amanda Griggs and Kaitlin Thomas will all be graduating in the coming weeks.

“The seniors set the groundwork for what this team did this season,” assistant coach Amy Warrick said.

“They set the bar so high and the girls all responded. Each of them worked so hard during the season and during the summer. They are the reason we were as good as we were.”

For Griggs, it was hard to believe her time with Goshen had come to an end.

“We had a hard time adjusting (Thursday),” the senior said.

“This season, these girls mean everything to me. I couldn’t ask for a better to go to state with. I wouldn’t change one thing – if I had to, I would do it all over again.”