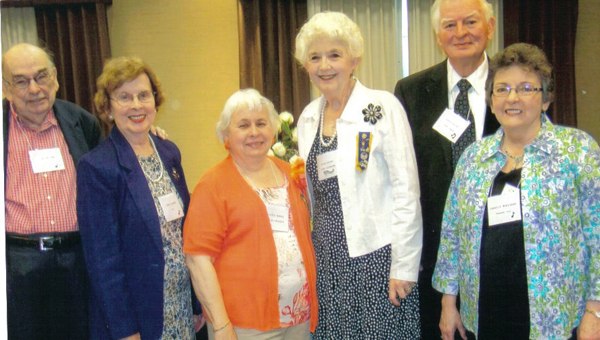 The Troy Music Study Club was represented at The Alabama Federation of Music Clubs Ninety-Fifth Convention by President Janelle Williams, Don and Lyra Crapps, and Jerry and Betty Spann. Hilton Gardens Inn in Trussville , Alabama was the venue for the convention April 29-30, 2011. The annual convention was hosted by Allegro Music Club, Melodia Music Club and the Shades Valley Music Club with Mr. Bill Peoples from the Allegro Club as the convention chairman. These clubs from district 2 are all in the Birmingham area. Mrs. Gayle Baker, President of the Alabama Federation of Music Clubs had as her theme for 2009-2011, “Music Thrills the Heart and Soothes the Soul”. Her hymn was “Because He Lives”.

The formal opening of the convention featured the presentation of the colors by The American Legion 21st District, Flag Disposal Unit, the Pledge of Allegiance, the National Anthem, the National Federation Collect and the Federation Hymn.

A banquet on Friday night featured a parade of club president at which Troy Music Club President Janelle Williams took part. During the banquet, there was beautiful music presented by “Stardust Duo”, a husband and wife team. Amanda Roberts, an 2011 audition winner, played the violin with Jonathan Roberts, a former winner, accompanied her at the piano. Following the banquet club members journeyed to Mountain View Baptist Church for the AFMC 2011 Audition Winners in concert. There were four Junior Winners and six Senior/Collegiate winners. The concert presented by these talented young musicians was the high light of the convention.

On Saturday morning, Jerry Spann, AFMC Chaplain, led the Memorial Service at which fifteen deceased AFMC club members were recognized by his or her club president. Each president placed a white rose in a vase and said something about the deceased member. Troy President Janelle Williams placed a rose in memory of Dr. Rhae Swisher, Troy ’s former long time treasurer. Dr. Swisher was active in the club until his death. At the close, Spann placed a rose in memory of all the Alabama people who lost their lives April 27th,as the tornadoes swept over the state of Alabama . Mrs. Lyra Crapps from Troy accompanied the singing during the memorial service. Mrs. Jan Hill, soloist from Bush Hills Music Club sang “Palms 121” accompanied by Ms. Joyce B. Jennings who composed the song.

New officers for the club year 2011-2013, were elected and installed. Some fun time was experienced as door prizes distributed several time during the convention. Opportunities brought by club member were given out Saturday. Money from these goes to AFMC scholarships.

Troy Music Study Club was awarded a Certificate of Recognition for twenty-five Senior Club Activities in which it participated. The Club was also given a certificate of merit from the National Federation for Music In Poetry. Jerry and Betty Spann were recognized during the convention. Mrs. Spann presented her husband, Jerry, a gift of “Life Membership” as he had done for her several years ago.

The convention adjourned Saturday after a buffet lunch. Mobile ’s Schumann Club will host the 2012 Convention in their city,