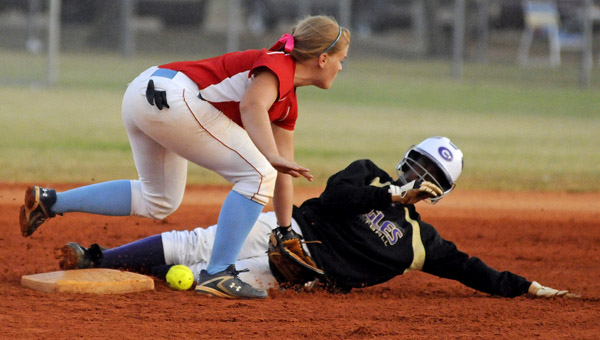 For the last time in the 2011 season, the Goshen Eagles took to the practice field just around the corner from their high school on Wednesday afternoon.

For the majority of that time, the girls took batting practice off of head coach Dee Hughes while laughing and enjoying the day.

If someone were to walk up and watch, they would have no idea the Eagles would be playing in the biggest games in the program’s history a day later due to the relaxed state.

However, hat is the case for Goshen as it enters the state tournament in Montgomery for the first time ever this morning.

But being relaxed in pressure situations is exactly what the team has done to this point in the season – and it has paid off.

Goshen is currently 29-9 overall, and has claimed its second-straight area championship as well as the Southeast Regional Championship.

So why change now?

It is that relaxed state that the coach said she has seen flashes of this week during practice, mixed in with something has rarely seen this season.

“I don’t sense that the girls are nervous,” Hughes said.

“I could tell the girls were nervous twice before, in the first game against Horseshoe Bend (in the regional tournament) and the first area game. I think they all just need to be reassured in themselves. They are good hitters and they have been playing very well. We have gotten this far – we can’t hold back at this point.”

Up first for the Eagles will be Bulldogs of Ranburne High School.

After its first season in 2A, the Bulldogs will be entering the final tournament of the season with a 16-12 overall record.

Despite Ranburne falling twice in the 2A North Regional to Sumiton, who was the 3A state champion just a year ago, it was able to secure the state berth thanks to a second place finish in last weekend’s tournament.

Though the Bulldogs have struggled at times this season, Hughes knows the challenge that will Ranburne will represent.

(Ranburne) has two pretty good pitchers and a strong defense behind them,” the coach said.

“They have a slower pitcher and a fast pitcher. That is similar to what we saw in Wicksburg and our girls know they can hit it. On top of that, they have a strong top-half of the lineup.”

That is more then the players know going into the game.

And that is something they are OK with.

“We don’t really know anything about them,” Kaitlin Thomas said.

“We have talked about their pitching and which hitters we should be careful to pitch to but that’s about it.”

The only thing that does matters to the girls is going in and playing their game.

“We know if we play well, we are going to be successful,” Amanda Griggs said.

“Our schedule this season has been really tough, we have seen a lot of good teams. So we are prepared for anything that anybody throws at us. I have no doubt we are going to be successful (at state).”

Even though Hughes said she has spent time looking at how the Bulldogs have played this season, when it comes time to play ball, everything changes.

“They made it to the state tournament for a reason,” she said.

“We can look at every state in the world, but in the end, we have to play well. The most important thing is that we go into this tournament relaxed. We are confident that our girls are going to be able to hit and play well against anyone.”

While the week has been filled with preparation and focusing on the upcoming opponent, Hughes said she noticed something different about her team when they arrived on the field Monday afternoon.

Even though it had been almost two days since the Eagles last played a game, the head coach said her team was physically and mentally exhausted from not only playing four games in two days – but from winning it all.

Now, the girl’s mental and physical stamina will be tested again with the stakes even higher than before.

“What the girls have been already very successful this year,” Hughes said.

“Going into this, you just know that when you give it everything you have and you play with your all your heart, you don’t give up and you really want to make your mark, you are a champion. We are all proud of how the girls have played to this point – but we are done just yet.”

The Eagles and the Bulldogs will face off at 9 a.m. this morning at Lagoon Park.