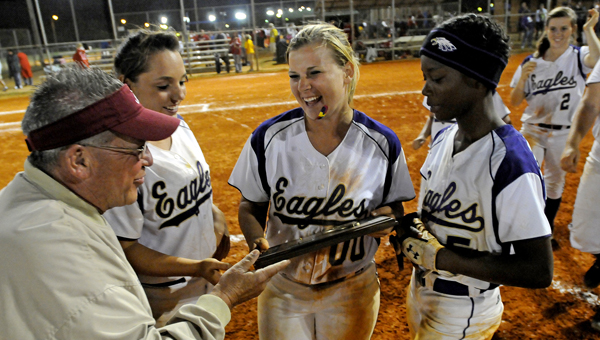 For years, the Goshen softball program has been working towards the goal of making the state tournament.

And while that goal was accomplished this past weekend at the Troy Sportsplex at the Southeast Regional Tournament, there were three Eagle players that were not going to settle for anything less.

It was the team’s seniors that had waited longer than anyone else to see this moment, as Niyoka Slater, Amanda Griggs and Kaitlin Thomas have been a part of the program since the ninth, seventh and eighth grade.

“Words really can’t explain what it feels like to finally be going to the state tournament,” Slater said.

“It’s amazing and overwhelming. It’s the best kind of adrenaline rush there is.”

The trio all played huge roles in the Eagles’ regional championship victory, as timely hits and strong defensive play helped pushed Goshen over the burden that has stopped them so many times before.

It was a Slater three-run home run that secured a state tournament berth over Horseshoe Bend.

An inside the park home run from Griggs helped get the Eagles going against Choctaw County in the second game of tournament play.

Thomas’ RBIs against Horseshoe Bend in the final game of the tournament helped clinch the program’s first ever regional championship.

All in all, the seniors combined for 13 RBIs in four games.

“We really wanted to show people what we were made of,” Thomas said.

“There were a lot of people that maybe doubted us at the beginning but are not cheering us on as we go to state. That’s a good thing and it motivates us to keep getting better and to go as far as we can go.”

When the season began, it was a combination of two things that motivated the seniors to help lead the way to a place the program had never before.

And while leaving a lasting legacy was one of the reasons, it was the remembrance of all the times the team fell short before that played the biggest factor in their eyes.

“I would not change one thing about my senior year,” Griggs said.

“It has been challenging at times, but in the end, everything has paid off for us. To be a part of the senior class that was able to win and go to state is just awesome. I really feel like we have accomplished something, not just us, but this team as whole.”

While the team enters the upcoming state tournament with a 29-9 overall record, things did not start off so smoothly.

After the first 10 games of the season, the Eagles were just 5-5. Shortly, after that, there came the turning point, as Goshen won 13-straight games.

“I think the biggest thing was our hitting,” Slater said.

“It got much better after those first couple of games. We worked on a lot of mental things in the field as well. Basically, we all just came together, relaxed, and played the game.”

Each of the girls received a scholarship for once their careers end at Goshen.

Both Griggs and Slater signed softball scholarships at the collegiate level while Thomas received a $60,000 scholarship from the National Guard.

Goshen head coach Dee Hughes has seen the girls rise up to this point.

And while she has said many times that it has been a group effort that has put her team in the position they are in now, she said the senior’s leadership has played a huge part.

“I was just telling the girls before practice started that this was their last shot,” Hughes said.

“Each of the girls have been on varsity for years. And now all the years that they have put into it, and it comes down to this shot that they have wanted. It was key for us to have the bat in the seniors hands to get us to the next level – they were all ready for this moment.”