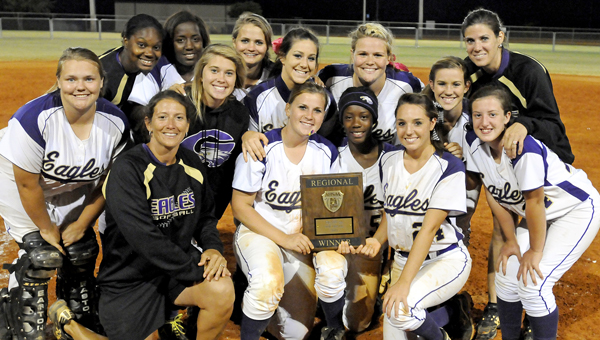 For years, Dee Hughes and the Goshen Eagles softball program have been perusing an illusive state tournament invitation.

Each of the last two years, the Eagles fell just one win shy of the accomplishment in the regional tournament.

Coming into the 2011 Southeast Region Tournament, Goshen had a mind set that no matter what, it was going to advance to Montgomery and the state tournament.

And on Saturday night, that goal and dream was realized.

While the Eagles clinched its first ever state tournament berth with a win over Horseshoe Bend earlier in the day, it was the championship game where Goshen put its stamp on the tournament.

For the second time in less than a 10-hour span, the Eagles defeated Horseshoe Bend, this time for its first Southeast Regional Championship victory.

When the final out was recorded, an excited and relieved Hughes said this was the biggest win of her coaching career.

“No doubt,” the head coach said with a smile and laugh.

“This was a long time coming. The girl’s came in relaxed and confident and they played like it. Everyone contributed. And that’s what it is all about. If we wanted to get to the next level, it takes everybody.”

In the four victories over the weekend, the Eagles outscored its opponents, 34-5.

Playing a big role in shutting down the other teams was junior pitcher Alli Warrick.

In 19 innings in the pitcher’s circle, Warrick finished with 21 strikeouts, while giving up just three runs off of 12 hits.

That effort was a big reason why Warrick was named the 2A tournament MVP.

“We wanted to win (the championship) pretty bad,” she said Saturday night.

“We want to make history, we wanted to be the first team to win the region and go to state – we wanted to go out with a bang and let people know who we were.” Offensively, several Goshen players stepped up for the weekend’s festivities. Senior Niyoka Slater finished with seven RBIs, off of two home runs, two triples and a double. Her second home run was the game winner Saturday morning against the Mustangs, as the three-run homer lifted the Eagles 4-3.

“The first thing I thought about when I saw the pitch go over the fence was ‘Yes!’, the senior said.

“It was an unbelievable feeling. I went into that at-bat frustrated because of how I played earlier in the game. I was just looking for a way to redeem myself.”

Along with Slater, six other Eagles had RBIs over the weekend. Fellow seniors Amanda Griggs and Kaitlin Thomas combined for eight runs batted in, while Shelby Vinson and Rachael Senn both added nine.

“Our seniors said they came to play for Saturday, they meant play to win,” Hughes said.

“Winners have a swagger. The bottom line is, we have had the ability to do this for a long time, but it was the confidence we had going in this season that made all the difference.”

The wins improve the Eagles to a 29-9 overall record, as the team now heads into the State Tournament at Lagoon Park with a first round matchup against Ranburne.

The first round will begin at 9 a.m. on Thursday.